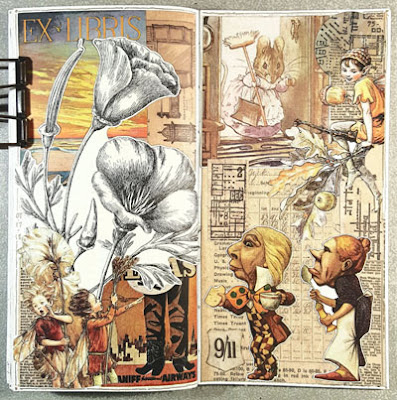 For the past 5 to 6 years, since I began with mail art/snailmailing, I've become increasingly interested in old postage stamps. When I was a very young kid in the late 50s, I started collecting stamps...but family changes, moves, etc. put the kibosh on that hobby.

So I've been ad hoc collecting for a few years now, deciding on which stamps are most appealing to me and swapping, selling or giving away anything else. I've kept my stamps in a 3-ring binder, in those plastic sleeves that hold ATCs or trading cards, 9 slots on a page.

Only recently did I decide I wanted to "formalize" my stamps into a real collection, in albums. I found an old Minkus 1954 International Album at the flea a couple months ago, for $5. And that just whet my appetite.

Slowly, I will work my own collection into the bigger albums, and remove stamps from the smaller albums to do the same. For U.S. stamps, I'm good with the Minuteman Album only going up to the late 1980s. Because I do not like 99% of the "newer issues," meaning stamps that are microlithographed as opposed to engraved (the Bureau of Printing & Engraving stopped issuing engraved stamps in the early 1990s, although many stamps prior to then were not engraved. The Bureau stopped printing stamps altogether in 2005.), and I have no intention of collecting them. Except the very few that I like, which I'll probably keep in a stock book instead of an album.

Not sure what I'll do yet with international stamps beyond the late 1950s. It's unlikely I'll find an album for them, short of buying Scott's now-50 volume World Stamp Album, which wholly sells for close to $14,000! I definitely will not go there, so I 'll probably keep those stamps in the same binder I'm currently housing my collection.

There was a time when I wouldn't have been happy with old albums. But I'm completely satisfied with them now. In fact, it feels like an honor to have acquired collections that were started in the past by I don't know how many people, work on and with them, and pass them on at the end of my life.

I've now got more old stamps than I could ever imagine before, many from countries and regions that no longer exist, and I would bet quite a few of them are very valuable, monetarily. The history in these album pages...an education for sure. Especially in view of how much the world has changed in the past 100 years -- or even 20 years -- I'd much rather have my head in old, vintage stamp albums, continually amazed at the tiny works of art before me, than watch movies or television.
Posted by Cate Rose at 8:34 AM 6 comments: 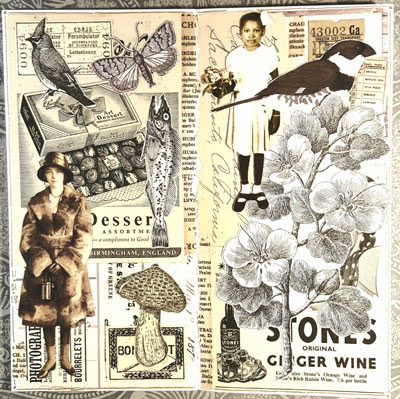 Sock knitting continues. The pair below was finished early last week. The pair from the last post, that I didn't especially like because of how the colors worked up, has a new home, with a friend who loves them. Win-win for everybody.

I'm resting my hands this weekend, focusing on reading the latest Tana French novel, The Witch Elm. I only have it for a week.

I've been collaging frequently, and replying to penpal correspondence. It's so hard to believe this year is nearly over and done with. Went to a Thanksgiving Dinner last night, hosted by the mobile park where I live. I couldn't help but notice that a lot of people here now seem younger than folks did when I moved in...the older ones died or moved away, plus I'm 10 years older, so most of the newer residents ARE younger than me! 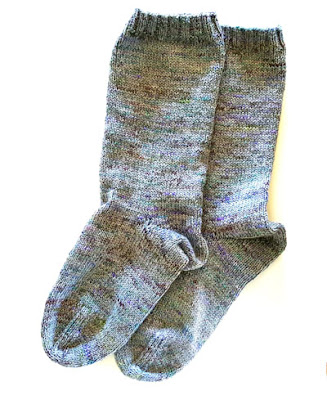 Our days recently have been mostly-clear and crisp. Parts of California are on fire again, with more new fires likely. It sure seems that every time new fires happen, they are more devastating than any previous fires. More total acres (1.7M+) have burned in California this year than in any previous year. There've been more fatalities in recent fires and much more destruction of homes, schools, etc. The entire town of Paradise, east of Chico, was wiped out by the Camp Fire last week. The Woolsey Fire in SoCal has burned from Simi Valley to Thousand Oaks to Malibu, right down to the coast highway. It's so sad.

I feel pretty safe in Humboldt County. No major fires here, no extreme weather (the long-standing drought in CA notwithstanding), as far as I know we haven't had any mass shootings here (although we do have a huge number of drug-related homicides and traffic fatalities).

Overall and in general, despite last Tuesday's election results, I feel things will continue to get a lot worse...and it might not begin to turn around in what's left of my lifetime. So I try my best to enjoy my life, here and now, and let go of the rest. Although it's a daily challenge, as I'm sure you all know, to live our lives without being impacted by what's going on around us.