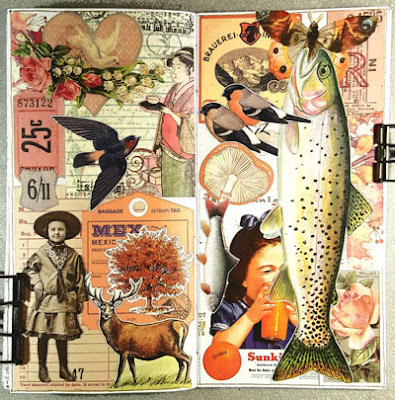 Contrary to everyone else celebrating their "new" bodies from weight loss, I'm celebrating that I have finally fully accepted the body that I came into life with...

This body that I spent 60 years trying to reshape via dieting, fasting, diet pills (years ago), working out, and god only knows what else.  Fortunately for me I never had an eating disorder, although I've had a "fat/thin" perception disorder since I was a teenager. (A fat/thin disorder is when you're thin and you look in the mirror and still see yourself as fat.)

Like many women my age, just shy of 70, I was brainwashed to believe I had to be thin or else... Or else what? I wouldn't find a man, would always be rejected, could never really get on with my life as long as I was heavy.

If I could recapture even 10 percent of the time I wasted in my life being obsessed with my weight, whether I was thin enough, whether I could squeeze into a smaller size, whether or not I was the heaviest girl/woman in any group, feeling not as worthy as my thin friends, feeling outcast and sidelined because of my plumpness, holding myself back from so many things because "heavy girls need not apply," ad nauseum.

And it's taken me this long to reprogram myself to stop thinking there's something defective about me because I could never stay a size 8 or 10, or even a 6 at one point.  Every time I lost weight, eventually I gained it back, and then some ~ like everyone else who's been on this merry-go-round for their lifetimes.

So not long ago, I just stopped with all that bullshit. I am now the size I would have been anyway all those years if I hadn't been trying in vain to be smaller than I naturally was.  And now I'm celebrating the body I do have.  I'm zaftig and I really always have been.  I have my father's body; he was a big man although not fat or obese. I wear an average woman's size now.  I'm not obese and never have been (although I was told that I was when I was just a teenager). Many heavier women would give their eye teeth to have the body I have now.

The only way I was ever really able to control my weight and become thinner, was to practically starve myself.  I actually decalcified my bones back in the day when my modus operandi was to do three- to six-week juice fasts periodically. Today I'm healthy, I have no chronic illnesses, and I'm pretty much eating whatever I want these days, albeit mindfully.  Because after all these years, I trust myself.

Thank god the social climate has changed to some degree from when I was younger.  A lot of younger women these days are wearing their flesh like badges of honor.  There's still a long way to go to create any sense of equity for women in our culture who aren't model-thin.  But it's better now than it used to be.

This just came to mind: I was following a page on Instagram for a while, something about style or wisdom in over-50 women.  But I stopped because every single one of the women in their photos were thin.  What about us less-than-skinny women? We have style too, we have wisdom to share, why are we still being left out of the conversation, in 2018?

A very good old book that I recently reread is The Obsession, On The Tyranny of Slenderness, by Kim Chernin. It's from the 80s but is still highly relevant today.  We women have been brainwashed by years of our culture telling us we needed to be other than how we naturally are.  If you're caught in this trap, as so many women still are, I recommend this book for an overview of what our culture has done/continues doing to women. We don't need to buy into it anymore. We need to reclaim the bodies that we were given, take excellent care of ourselves, and just be who we are.
Posted by Cate Rose at 1:11 PM

Good for you Connie, you're right on point!

Yet another post that I could have written. Every single thing you wrote is about me too. Really I should weigh about 145. That's what the chart says and that's the weight I physically feel pretty good weighing. During my recent trip to the doc he mentioned if I weighed one more pound I would be obese. Thank kind of shook me up since I put that weight on fast. I took a look at what I consume and I am certain that my bad habit of adding liquid flavored creamer to my coffee is the culprit. I no longer obsess with my weight, but I admit that I don't want to have to buy new larger jeans. So I'm going to use the rest of the creamer I have and give it up. I'll be concentrating on ridding a bad habit and not the scale.
xx, Carol

:) I'm at the point where I either lose a few pounds or buy a new wardrobe and neither appeals to me. It is not my actual weight that bothers me, but where it is becoming distributed. I can't stand a tight waist!

Oh, so well said. I have pass on what you said to a friend. Thanks, Connie.

Healthy and 'freeing' philosophy and so well-expressed, Connie! It's so hard to rid ourselves of mentalities that lived in our psyches for oh-so-many years. Revel in the person that you are, whatever package you come in, and live your life to the fullest and healthiest you can. What others think should have no bearing on how we think of ourselves or how we live our lives; their opinions aren't as important as our own, and should not dictate how we think of ourselves. But yes, I know...easier said than done! But you've now done it and I hope we can all follow your lead! You go, girl!!

Stay healthy, enjoy life, that's my motto. My best defense against age has been to focus on eating healthy. Thank goodness, I was never pressured to change my body. I can only imagine what it must feel like to always think you are not right, due to the attitudes of others. I'm glad you are in a good space now where you accept who you are and would probably have a few choice words to say to those who tried to make you over into what they thought was the 'perfect' weight! Another victory for you, in my humble opinion. Keep it up!