I'm fairly certain I haven't posted this image previously.  I'm blogging from my tablet today and don't have access to my folder of not-yet-posted images.

That roll that I felt I was on, a couple weeks ago, has definitely been slow going this week.  I did finish the foundation piece I was working on, and am in process of basting it to a backing fabric.  I haven't gotten very far on that, though.  Just haven't felt moved to do much of anything this week except read, be off- and online, and just take care of hearth and home.

After a 3-day Indian Summer, fall has really set in.  It's soup weather.  I'm making a pot of minestrone as we speak.  Planning to make a lot of soup this year.  I've gotten too lazy to cook for myself every night, so pots of soup, which can last for weeks frozen, are right up my alley.  We're expecting rain this weekend ~ it's felt like rain for the last couple days.

My sinus problems appear to be gone, largely.  I'm very happy about that, obviously.  Now I'm occasionally adding back in some of the foods that I dropped from my diet nearly seven months ago, to see if I'm truly gluten-intolerant, or whether my body might just have been awash in histamine from a variety of sources back then, that it appeared that everything with even a speck of gluten in it caused major allergy symptoms.  The blood test I had in January sure didn't look like I was seriously gluten-intolerant, as the allergen levels were low-to-non-existent on nearly all the relevant foods.

I've added back in organic butter, and an occasional organic egg in something baked.  Last night I had sushi with rice.  So far, no problemo.  I've also been experimenting with gluten-free baking, trying to master the chemistry of that like I mastered the chemistry of cheesecake a few years ago.  I'll probably never bake a cheesecake again, sadly.

I read a fascinating history recently called Lawrence in Arabia by Scott Thompson, about T.E. Lawrence's role in Arabia during WWI.  And then saw the movie Lawrence of Arabia again last weekend.  Everything going on in the film finally made sense to me.  The book also provided a good grounding in understanding the realities of the continuing wars and general unrest in the Middle East.  The truth is very different from what we've been lead to believe.

Enjoy the last days of September.  October is my favorite month, so I'm looking forward to the shorter days and some gloomy weather.  Rain would be a bonus.
Posted by Cate Rose at 2:32 PM 4 comments: 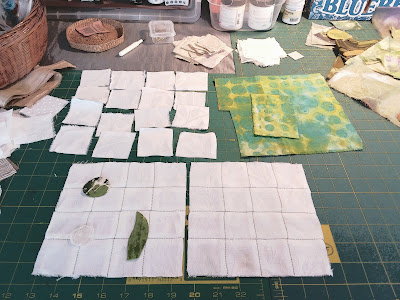 This is what I've been working on this week, although progress has been real slow.  Yes, it's little squares again, but the 64 pieces stitched together will produce a 12 x 12 inch foundation cloth on which I'll do further work.  The few bits placed on the left panel are merely being played with at the moment.

This has been quite a week.  I finally, in the end, decided I would get a cellphone, which I did earlier this week, and here's why:  On Sunday early evening, I started having heart palpitations.  Lots of them.  Nonstop for an hour and a half.  It scared me enough that I went to the E.R. and spent 3-1/2 hours there while they pumped me with saline solution, ran two EKGs, took blood, and observed me.  I'd had my neighbor drop me off at the E.R. and pick me up later when I was ready to go home.

While I was there, however, not having a cellphone, I couldn't contact anybody.  Nobody else knew I was there.  I felt terrifically isolated.  Thank god there was and is nothing wrong with me, and I've since learned not only that heart palpitations are pretty common (especially in this traumatic day and age we live in) but how to manage them on my own.  But...what if I'd had to be admitted to the hospital, or worse?  I was completely out of communication.

The heart thing had nothing to do with the recent sinus surgery.  More, they were and are about anxiety.  Having anxiety show up as heart palpitations is new for me...but we do change as we age.  I'm grateful that I had that initial experience and that I've learned what I need to do to deal with a racing heart, because I'm newly aware of how stress and anxiety are affecting me.  It was never obvious to me previously when I was under stress.  I'd just keep piling it on, or letting it happen with no way to gauge the impact.

Anyway, about that cellphone ~ part of my prior resistance had to do with redundancy or superfluity.  I really didn't want to have an excessively large amount or number of something. At the start of this year, I had a laptop/wifi in the house, an old digital camera, and a landline.  Now I still have those, plus a Kindle, a tablet, and a cellphone.  Oh well.  Whatever.  This is modern living, something else I've been avoiding like the plague for as long as I could.

Enjoy this first weekend of fall.
Posted by Cate Rose at 1:07 PM 7 comments: 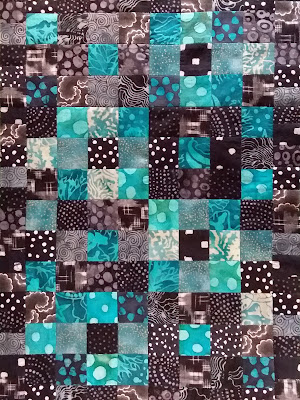 I completed this piece yesterday, and it's as finished as it's going to be.  Meaning it has no backing and I'm not finishing the edges.  Perhaps it'll get added onto in future, or maybe not.  But it's done, as far as I'm concerned, and I'm ready to move on.

The unnamed piece is 15 x 22 inches, all commercial fabrics.

I'm feeling completely recovered from my surgery on Thursday.  The residual stuffiness is slowly tapering off, I'm glad to say.  I was pretty bummed on Friday when, after the nasal bleeding stopped, my right sinuses were really congested.  But I learned yesterday, when the surgical nurse called to check up on me, that temporary sinus issues are common following sinus surgery.  I have a post op appointment this coming Wednesday.

Anyhow, I'm back in the saddle again, and I have a number of ideas for new stitching projects which will likely not be quite so small-square focused.  Jude will be giving her Sun, Moon & Stars class for free, right on her blog as regular blog posts, beginning this Wednesday or Thursday, whichever day the equinox is.  I'm thinking I'll play or work along with the videos, in addition to other ideas I have in mind.

But largely, I want to move in a new direction with handstitching.  The ideas I'm currently considering are not new for me, it's just that I haven't executed them yet.  It's been easier for a while now to default to small squares than to stretch myself.  But now I'm feeling in the mood to push the edges design-wise.

Hope you have a great first week of autumn, my go-to season.
Posted by Cate Rose at 11:17 AM 7 comments: 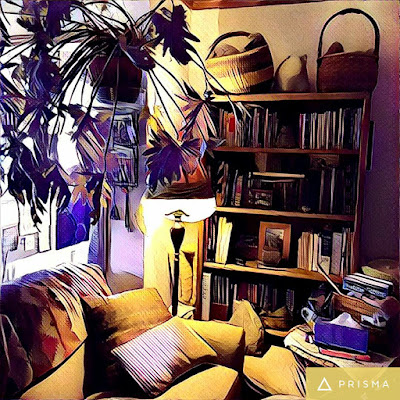 I'm sitting in this very spot at the moment, in recuperation mode from yesterday's sinus surgery.  The procedure went well.  It was an interesting adventure being in the hospital for the morning.  I was treated exceptionally well. The staff who took care of me even gave me a Thank You note, thanking me for letting them serve me.  How 'bout that!

I was abed the rest of yesterday, but I'm sitting up today.  My head still hurts some, probably from the anesthesia, but I'm feeling better overall.  There is and was no pain at all from the procedure, for which I'm very thankful.

I managed to get a lot done on my latest stitching project, earlier in the week.  With any luck, my next post will show the finished piece.  It's nothing special, really.  But I like it.  And it got me thinking about future stitched pieces.

Mostly, for the next few days though, I'll be reading and resting.

Hope you have a great weekend!
Posted by Cate Rose at 9:33 AM 6 comments:

The End of the Line

I recently began working on my family history/genealogy.  It's a project that I'll spend time on over the next months, at least.  I have to pace myself because I can't sit at the computer for long periods of time; it's simply too hard on my back.

My grandparents were all Eastern European ~ Russian, Romanian, Austrian, Hungarian.  The former two countries, my paternals; the latter, my maternals.  Thus far I've been able to find more info about my dad's family than my mom's.

I'm working with FamilySearch.org, which is a free service of the LDS, where Ancestry.com is their paid service.  I'll go as far as I'm able before I have to subscribe.  Thus far I've been able to find the answer to many of my initial queries.

Like that my maiden name, Berk, was shortened from Berkovitz by my Grandpa Ben.  And at about the same time, Grandpa's brother Joe changed Berkovitz to Burkhart.  I'd been wondering how my dad wound up with Burkhart cousins, which I remember from when I was a little girl in the 1950s.  Now I know.

Grandpa Benny and my Grandma Sara both came from large families, huge in Grandpa's case, with something like 10 siblings.  It's interesting to me that Ben and Sara only had one child, my dad.  I've been wondering why that might have been, but of course I'll never know for sure.  My ultimate quest here is to find out whether I have any 3rd or 4th cousins and if I can find them.

Although I've spent more time so far on my dad's side, my initial search into my mom's side of the family turned up a couple siblings in my Grandpa George's family.  I actually only have, or had, one first cousin, my mom's brother Sidney's son, Michael.  He would be my age.  Haven't found him yet, dead or alive.

I can say this about these two families ~ on my dad's side, the families were large and appear to be, from what I've been able to tell thus far, cohesive.  I haven't yet turned up any evidence of divorce.  Whereas on my mom's side, the families were smaller and divorce featured from generation to generation, at least going back three generations.  Sometimes lately I've wondered to what degree many of the life issues I've dealt with were due to my parents' divorce when I was a preteen, alone or in concert with my NPD mother.  Divorce is a shattering experience for kids, at least it was when my parents were divorced in the early 1960s before "everybody" got divorced.  They say divorce runs in families; they're right.  I was divorced twice as was my brother.

At any rate, I am the end of the line for the Berk clan, at least my dad's spur.  No kids for me, and my brother had a daughter who never identified as Jewish anyhow.  So this is it.

In other news, my sinus surgery is scheduled for next Thursday, September 15.  I'm sure everything will be fine, the procedure I mean, but I'm still a tad nervous.  So glad it's just an outpatient thing, although it will be done at the hospital.  I don't like hospitals.

I'm slowly working on my new stitching piece but I only last night got a handle on where it might be going.  In general this isn't being a hugely creative period for me.

Have a wonderful weekend.  Thanks for reading.
Posted by Cate Rose at 1:22 PM 7 comments: