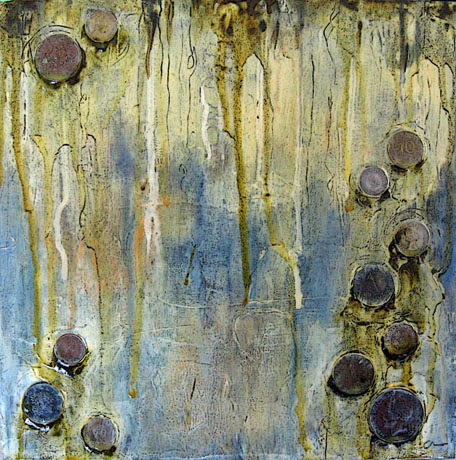 This is my first painting for the next lesson (Lesson 8), which was to embed objects into the piece.  This is a 10 x 10 inch cradled wood panel with foreign (non-U.S.) coins embedded.

I've been thinking about honesty lately, actually about how honestly explaining myself has gotten me into more messes in my life than had I been able to tell little white lies that didn't hurt anyone.  I never got that gene.  I've always operated under the "honesty is the best policy" advice.

The world, however, doesn't turn on honesty.  Most people are far more interested in themselves than they are in you (or me) telling the truth about ourselves.  It's taken me this long to realize that it's usually just better to make something up than to tell the whole truth.  The truth, most times, is probably too much information, and everybody is on information overload these days.

I think it was Winston Churchill who said, "Tact is the ability to tell someone to go to hell in such a way that they look forward to the trip."  Diplomacy has never been one of my strong suits.

There is another side to this, though, and that's the aspect of living one's values.  Some of my values, especially when I worked, are and were to have integrity, to be just, to try to make a difference, and to aspire to being part of the solution rather than part of the problem.  In numerous instances I found myself, because of nature of my role in an organization, to be caught between a rock and a hard place.  Opting to uphold those values always got me in trouble, i.e. hated, ostracized, fired.

I couldn't not speak my truth.  And not much has changed since then.  At the end of day, it always seems that choosing personal integrity over lying is the way for me to go.

... and the best way for all, but often so difficult to do. Sometimes it's hard to know what the truth of a matter is, which makes it even harder ...

PS Love the textural contrasts in this piece ... and the soft subtle colours.

Very nice piece--I like watching you do these assignments.

Honesty...hmmm. I am learning in my "old" age to say less. Certain people will continue to defend their pt. of view, so there's no point for me to continue with what I see as true.

Here's an honesty problem I just had. A friend who travels widely is in the area and wants to get together, and it came down to me driving to SF on Tuesday for the day, as she had a redeye flight out. I wanted to see her, but I didn't want to drive to SF, spend $ on parking and activities, OR, this is the crux of it, I wanted to stay home and continue w/ my fabric sorting, which seems endless right now. But this sounded lame to me. I had not yet decided, when she let me know that her plans had changed and she has to leave early, so wed can't get together. Whew.

My debate with myself was whether to make up an excuse, or just say I didn't want to drive to SF--not the whole truth.

I have a cousin who doesn't go into the why of not being able to accept an invitation, but says how sorry she is and how disappointed. I think this works well.

I know this is off-topic and ignores the bigger issues of telling the truth...I also am finding that w/ a certain person in my life that I must say my truth, mostly because she is trying to tell me what I think, or explain to me what my friend or relative was thinking, and she's usually wrong.

I am loving your color palette lately.

Funny you should be chatting about telling the truth and white lies. Tim and I have been discussing this lately. The white lie thing is actually quite a moral dilemma. I have found recently no matter how innocent a question might be it can be taken totally a different way. Of course, that is totally a different topic. :-)

the painting is so very interesting - it is intriguing in fact.

and the text - it is poetic how you juxtapose your inner feelings about what you are thinking about with a work from your inner self.

thanks for being honest here.

Honest is sometimes hard, tone of voice is the hardest!!! That, and facial expressions. I hope you continue to be totally honest in your writings here, because they always give me "food for thought".

Cool painting. Love the color palette and all the drips. With the coins, it sorta looks like an overhead shot of a stream with old jetty posts. Or maybe I've had too much caffeine.