The older I am and the less I have materially, the more generous I've become.  Largely this is because there's no longer anything I'm trying to get or have.  Also, it's true what they say ~ It feels good to be generous.  And I'm convinced generosity is part of my karmic path.  I grew up with a paucity of charitableness coming toward me, in all domains, including financial assistance, compassion, openheartedness, etc.  So one would think I might turn out to be selfish; but I haven't.  I've been anything but selfish in my life, and have become even more generous with age.

I wrote my will several months ago, which was a really excellent exercise.  I don't have anything substantial to leave, just the relatively low-value stuff I do have, most of that artwork I've created.  But really thinking about who I want to get what, and in the process inventorying everything I possess, brought a sense of clarity with it.  It also enabled me to cut to the chase, so to speak, with regard to the people in my life.

That process also made me realize that although I could die with a lot of stuff, I want to offload as much as I can before I go, over a reasonable period of time, so that I can delight in other peoples' joy...both the joy of receiving, and the joy inherent in having been helped in some way from what I have to give ~ stuff, my time, and the sharing of my skills.

When I do leave this life, and I am in excellent health and plan to be around for another 30 years or so, I want to be remembered for having been generous and openhearted, among other things.  I want to have righted the line of selfishness and lack of compassion that I was brought up with.

Wednesday was one weird day.  First there was a major fire in downtown Fortuna very early in the morning, that destroyed an historic building and five resident businesses (plus the apartments of people living upstairs).  Then the local computer store was burgled, probably while everybody was focusing on putting out the fire.  Then we had a 5.7 earthquake that shook the dickens out of Rose Cottage, early in the afternoon.  There were no fatalities from anything, and no reported earthquake damage as far as I know.  But it was one strange day in our little town.

Also recently, while we're talking about weird stuff, Proposition 47 passed in California, reducing penalties for some crimes.  I think the intent of the proposition was to get non-violent, supposed non-serious felony crimes lowered to misdemeanors, and basically rely on neighborhood watch groups to do their own policing.  Although a reading of the measure says nothing about non-violent marijuana offenders, my understanding early on was that a law of this type would get those folks out of prison, which is as it should be.  In effect, what's happened with the passing of this measure is that crimes such as shoplifting, grand theft (under $950), forgery, fraud, and personal use of most illegal drugs are now misdemeanors.  The reality is that the cops won't even pursue such criminals at all.  Meaning individuals and small business owners have NO recourse if they are the victims of such crimes.

The reason I'm even mentioning this is that Miranda's Rescue, which I'm a big supporter of, has been broken into four times in the last couple months.  In late November, their Fortuna, Eureka and McKinleyville stores were broken into.  And even after more and better security measures were taken in the wake of the break-ins, the McKinleyville store was hit again this month.  And local law enforcement is nowhere to be found; they can't do anything so they won't do anything.

I am appalled at what's become of our justice system in this country.  Basically, there is no justice system anymore.  Offenders can pretty much do what they want, short of murder and rape, and get away with it.  And for more serious offenses, how often, now, are the rights of offenders taken into consideration more strenuously than the rights of the victims of crime?

I don't know...I sit here just shaking my head, watching the foundations of our so-called civilized society crumble before my eyes.
Posted by Cate Rose at 10:07 AM 3 comments:


These two paintings began as red squares early last year.  I finished them over the weekend.  Originally there were four red squares ~ the other two got tossed after several layers.  Moving on.

But taking it slowly.  Now that I'm making art on a more regular basis again, my neck and back have been bothering me again.  No worries ~ I've got the rest of my life to explore with paint and collage, and I'll just continue taking things one day at a time.

Short and sweet.  Have a great week.  And warm wishes and blessings for those on the East Coast as Juno blows through.
Posted by Cate Rose at 10:01 AM 8 comments:

Picking up where I left off... 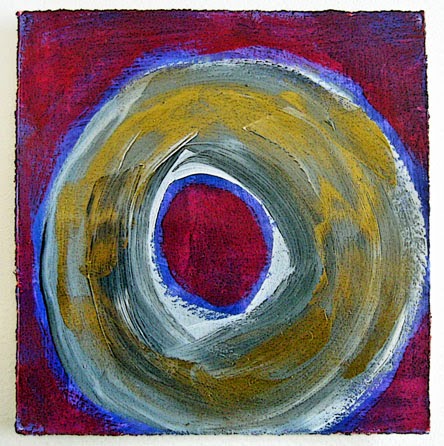 I have a stack of unfinished paintings from early last year that I'm finishing up so I can move on.  These are all small ~ 5-1/2 or 6 inches square. 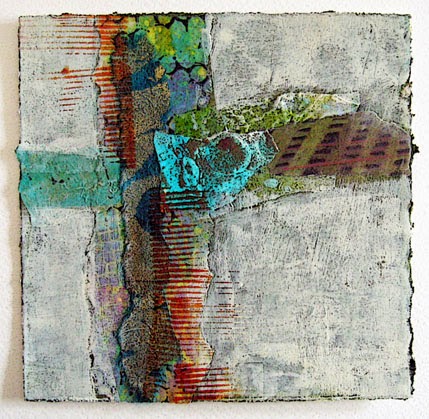 My strategy now is to work things until I like them they way they are.  I'm not one to continually rework something to make it "better."  And if I'm not liking something and it can't easily be reworked to be more pleasing to my eye, then I'm tossing it.  It's not worth my time and energy to rework and rework and rework.  That's beside the point for me.  The point being, I don't care if it's "good," I only care if I like it and if I've enjoyed making it.  If it also turns out to be "good," then so much the better. 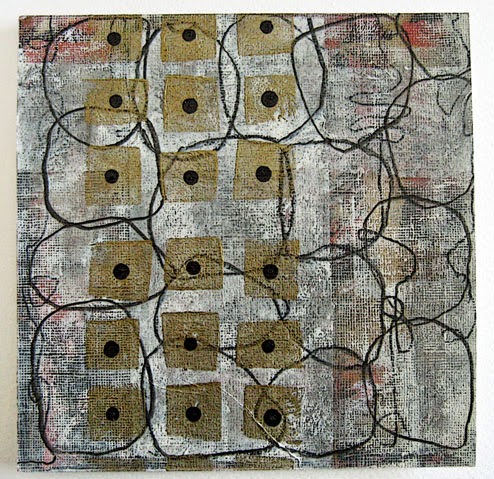 Now that I've actually begun the next thing, I can say what it is ~ I'm painting again...although "working with paint" sounds less overwhelming to me than "painting" does.  Gelli plate printing is planned, as well.  I just want to work with paint now.  I actually fooled around with watercolors for a bit on Friday.

But I've also begun doing some collage again, and painted postcards and ATCs.

I'm going to take things slowly, I don't have an agenda, I'll just move between things as the mood strikes.

I recently finished In Pursuit of the Proper Sinner, another Inspector Lynley novel.  This one bogged down a bit for me and I thought perhaps I'd leave the series and move on.  But I'm just a few books away from Careless in Red, the very first of the Lynleys I read, that I'll likely just keep on, catch up, and then jump in front of Careless to finish the series.  I also read The Dead Season by Christobel Kent, which I loved.  Murder mystery in Florence with Italian P.I. Sandro Cellini.  Wish my library had more of the series.  I'm currently reading Good Bait by John Harvey.  He's written a ton of mysteries, including several series.

A while back I found a fab website called OrderOfBooks.com.  Just put in the name of the author you're looking for, and you'll get all his/her books by series, in order of date of publication.  It's been an awesome reference for me as I find new-to-me authors I want to follow.

We're in for some spring-like weather on the North Coast for the next week.  We haven't had much in the way of winter yet, this year.  Hoping for a lot more rain between early February and May, when our "rainy season" typically ends, but who knows.  The west's severe, deep drought may worsen yet. 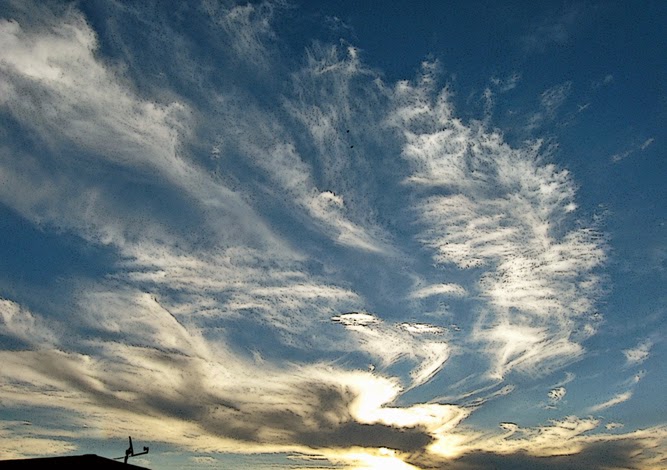 I've been thinking about time lately, and how it passes.  Twenty-five years ago seems like yesterday in some ways...  Although in 25 years from now, I'll be 91.  Now that is really freaky.
Posted by Cate Rose at 2:14 PM 7 comments: This is the last journal for this run, completed yesterday.  Believe it or not, when I began this journal roll in October, these book boards were the first I'd prepped...yet it was the last journal I made.  Funny how that goes sometimes.

I made another book with this fabric a couple years ago, and kinda wanted to do another one similar to the original.  The only things that are common between the two, though, are the fabric covering the boards and the fact that they're both in horizontal format.

So there you have it ~ the handmade book report...until I take it up again.  Meanwhile, onward. 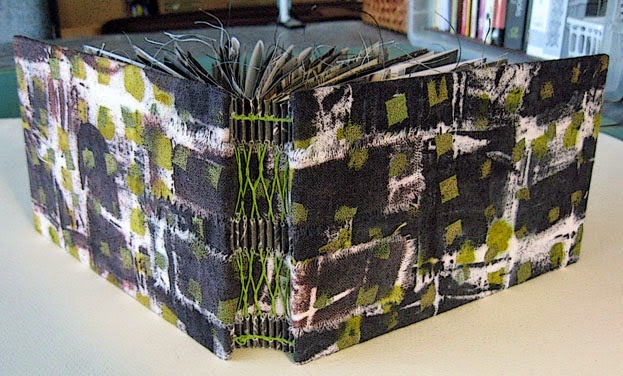 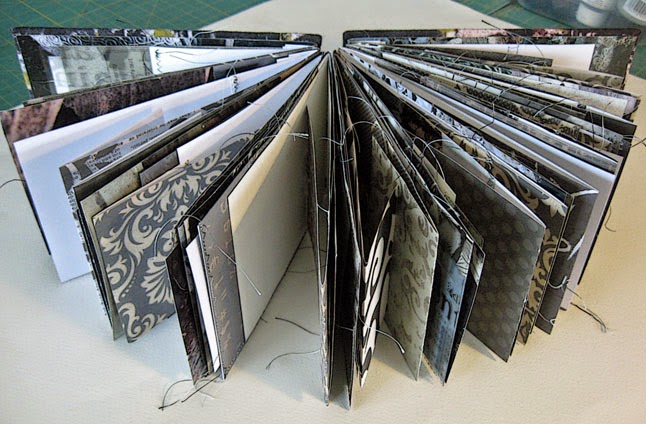 A Little Something on the Side 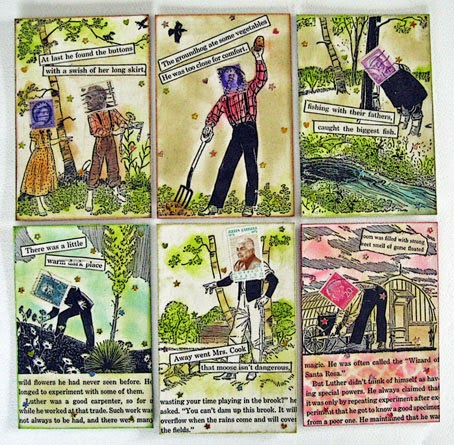 This isn't the next big thing for me, just a little something I've been working on in snippets of time over the last couple weeks.  Most of this batch of postcards (and all of these six) are illustrations from a kids' book about Luther Burbank.  I colored them with stamp pad ink applied with cosmetic sponges. 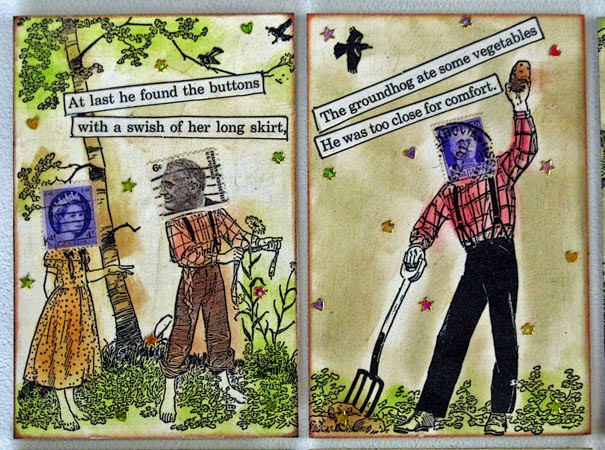 I've been busier than usual this week, through yesterday.  Today I'm resting up, or will be after I finish this post.  Catching up on "me" time.  I've begun volunteering my time with Miranda's Rescue, in the admin office, doing a little of this and a little of that, development and P.R. stuff mostly ~ the parts I really liked when I was employed with nonprofits.  It feels really good to be volunteering my time ~ an excellent confluence of where my heart is, with animal rescue work, and this time in my life when I'm retired from paid work. 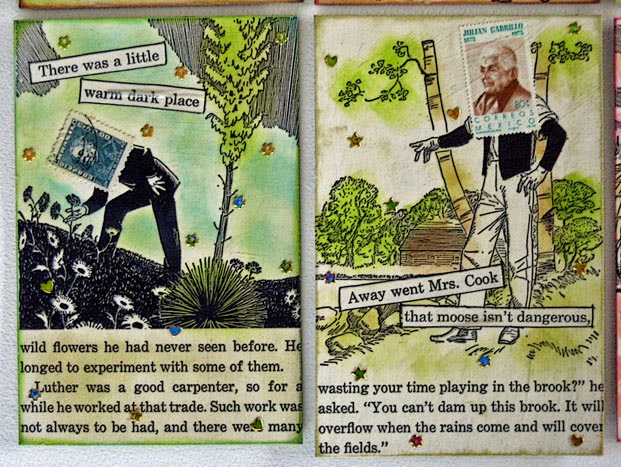 I'm reading Fallen Land by Patrick Flanery, and enjoying it immensely.   Will look for his first, Absolution.  I'm glad there are so many outstanding new authors these days.  What a feeling of security that I will never run out of good things to read in my lifetime. 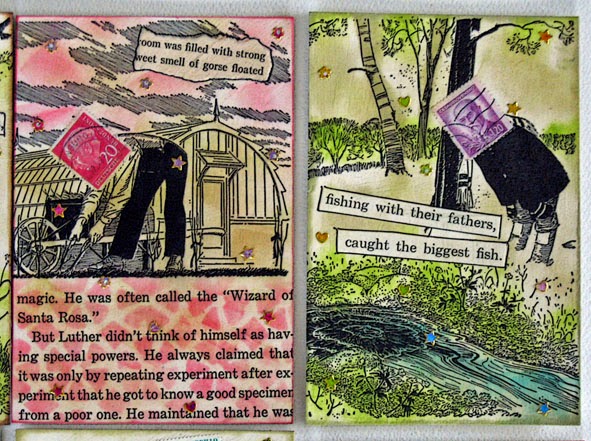 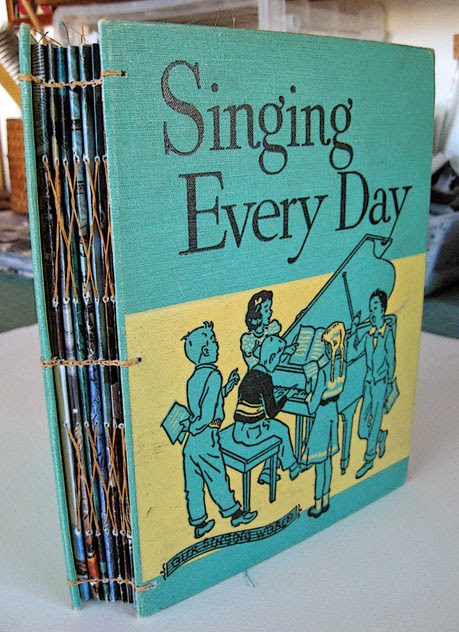 Yes, this is the same book I posted last Tuesday.  However...later that day I took it apart, added spacers between the folios, and rebound it with doubled 2-ply waxed linen.

Spacers are merely narrow strips of paper or cardstock inserted between folios and bound in with the rest of the signature.  They make the book thicker at the spine edge.  Since most of my books end up being too fat on the fore edge, I need to insert spacers.  Which is what I did the second time around.  (You can also attach things to the spacers, with glue or by hand stitching, after binding.)

Also, the single 2-ply thread looked and felt too wimpy for the heft of the book.  So I doubled it on the rebound.

I read three really great books just since New Year's Eve ~
About 10 days ago I finished Mean Streak, by Sandra Brown; she's another author to follow.  Also read The Secret Place, Tana French's latest.  I haven't liked her last two (The Secret Place and Broken Harbor) as much as her first three.

Planning to make that last journal sometime this week, and then move on.  Meanwhile, I've been reorganizing a few things in the studio.  And easing into the year.

Have a great week.  xo