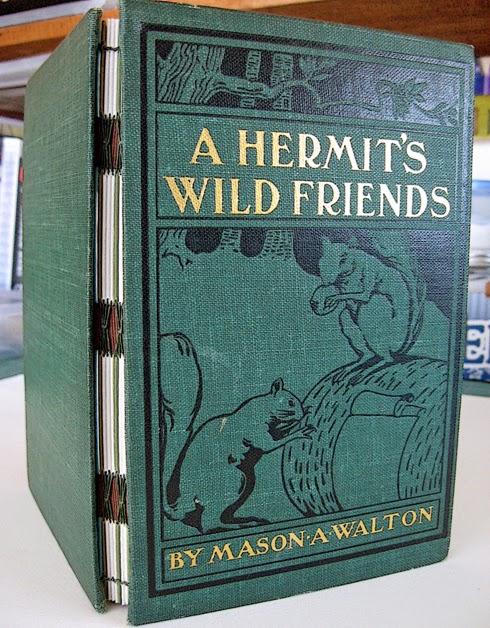 For many years I've applied the moniker Samurai Carpenter (ala John Belushi) to myself, to describe my exploits in DIY home improvement and the like.  You have no idea what I've been able to do with a hacksaw, a corded drill, some primitive hand tools and sand paper.  But more on this later...

I took a fabulous book binding workshop on Saturday, sponsored by NorBAG in Eureka.  Each person in the class got to select which old book they wanted to use well beforehand, so the signatures had been cut to spec for each of us prior to the class.  This is the book I'd selected.

Everybody got the book block from their books to take home and use later, either in the journals we made or in something else.  I had no idea A Hermit's Wild Friends was going to be a natural history tome, complete with tons of drawings and plates.  So in addition to making this great journal, I've got the innards to do other stuff with later. 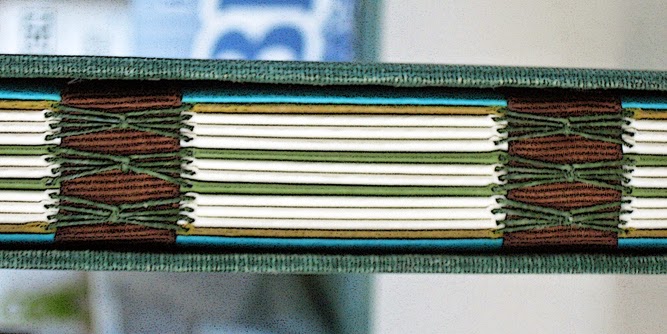 This is the Bow Tie stitch that we learned.  A very cool thing about this construction is that all the knots are hidden. 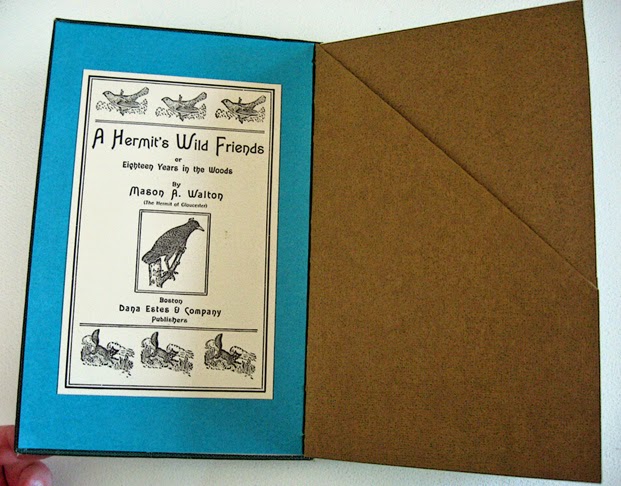 There are four pockets in the journal, and I've used the original title page on the inside front cover.

We used sewing frames to make these books with sewn-on tapes.  I love this construction but I'd never used a sewing frame before.  The frame definitely made construction a lot easier (and might actually foil BeeGee, who drives me nuts going for the thread whenever I'm trying to bind books).

Later Saturday evening I decided I needed to have a sewing frame.  But even the least expensive is too dear for me.  Saturday night as I lay in bed I figured out how to make my own.  And that's exactly what I did yesterday. 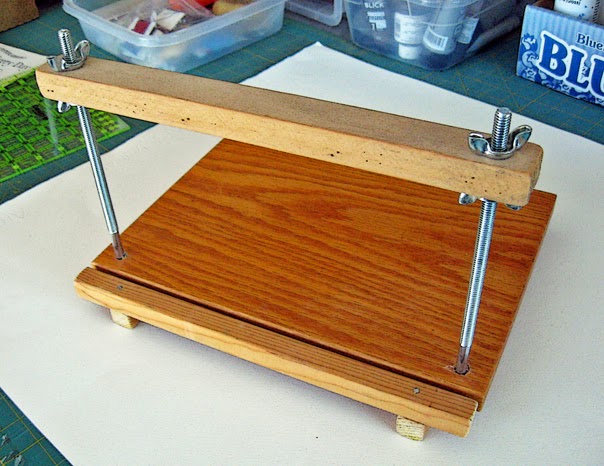 Voila!  My sewing frame, with recycled wood.  The beautiful oak bed of the frame was one of several oak panels I used when I did shows, to stand my jewelry stands on.  I haven't done anything with them since 2000, except hold on to them because the wood is so beautiful.  I finally put one to use.

The three short pieces of 1x1 on the bottom were cut from one side of a silk-painting frame I've had since 1992.  The other parts of the frame are under one of my studio tables, increasing the height of the table top (among other things I've got under there for the same purpose).  I scavanged the crossbar wood yesterday from a neighbor's shed.  I already had the wing nuts.

Total outlay yesterday:  $2.50 for the long bolts.  Pride in having built this beautiful sewing frame myself:  priceless.
Posted by Cate Rose at 7:50 AM

That's one helluva beautiful binding, and you are indeed a samurai carpenter of the first rank. I envy your skills.

You never cease to amaze me! I love that stitch as well!

Okay, first of all what a perfect book selection for you. And, I too love the stitch, though probably too advanced for my patience level. I love the whole finished book look and your using the title page.
And lastly, how clever you are to make your own stand ...looks terrific! Great job, Connie! ♥

Lovely binding. I do love to make books but am unfamiliar with a sewing frame. Will go google it next. Good on you for making one yourself. I, too, am a sometime Samurai Carpenter, much to my fine woodworking husband's dismay. So many things are do-able, if you look at them carefully and figure it out. Yay for capable women!

I wish I was HALF as handy as you! Well done on necessity being the mother of invention ...

Say, you may wish to go peek at this shop over on Etsy. We've got a book artist here on Lopez who's doing similar to what you show here. She's come up with some interesting Travel Journal ideas, etc., think you might enjoy a look-see:

Your book is FAB, Connie!

Brava! I'm intrigued how the sewing frame works--will google it. BeeGee will be disapointed, but then again, he may not remember!

The book is wonderful--great title and so happy for the insides.

Love your book! Wish I had known about the class, just might have come down to attend.

Perfect DIY job. What a great use of materials. So that's how you can hold it all together to get those beautiful binding stitches. What a perfect book too. Can't wiat to see where your innards show up. I need to take a bookbinding class one of these days. Maybe next Spring, after house is more livable. xox

Great post,Connie. Positive and uplifting. The book looks very well made. Hope to see it in person. Soon. With pie...

It was fun sitting next to you Saturday and your book turned out beautifully!
Congrats on the sewing frame...good job! Like your blog, too!
Pat

Gal after my own heart! I love to use scraps to make things, and your sewing stand looks so clever and very handy! And yes, your book looks great as well, but I think I'm more impressed by your ability to mentally design your stand, then find the materials needed to create it... a true pioneer woman!

Beautiful book. Great job on the sewing frame as well. It always feels good to make something yourself with stuff you have laying around instead of buying one for 5 times more what you spent.

Your newly constructed journal is beautiful and I love the variety of colors to the signatures. Echoes so well the cover color. Just a beautiful job. But what really impresses me is your Samurai Carpenter ability! Well done, I say, WELL done!

Ooo - love that bow-tie stitch! And although we can muddle along making do, oh how much easier our tasks when we have the proper tools. Way to use a lifetime of skills and an eye for recycling.

Love that binding and well done you for making your own block.

Love that binding -- so cool. Your book is fabulous and how cool you made the sewing frame yourself!

well done you. I have never had the courage to take up the saw or drill.

Wow! What a great class that must've been.

But I am most amazed and impressed by that fantastic sewing frame! Wonderful!!

WOW, that is awesome, Connie. You did real good. That frame looks master crafted. How great you must feel for having done it yourself. I just got myself a new drill...the possibilities are endless.

Also, love the bow tie binding. That must be such an interesting and creative class.