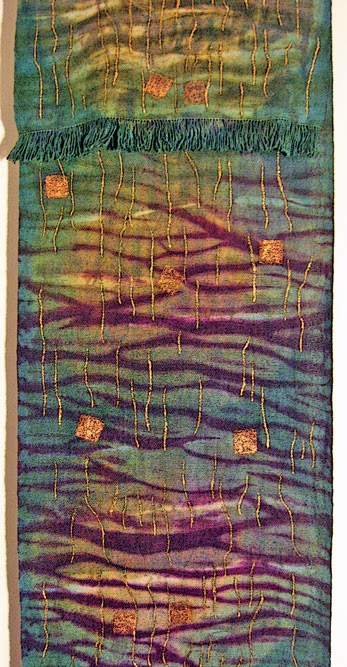 This morning feels like the first Friday of autumn, even though it isn't officially yet.  There are major forest fires in far-northern California and southern Oregon, so we've had a lot of smoke in the air this week, down here in Humboldt County.  Gives the air and the light that brown-tinged appearance.

Since my current art making activities have slowed down to a snail's pace, I thought I'd take new images of the best of my previous work, and post them here.  Most of you readers weren't following me when I created these works so they'll be new to you.

This is my best ~ and my favorite ~ piece of art cloth.  It's a length of handwoven silk that was originally a woven shibori scarf.  For those who might not be familiar with the term, woven shibori is a process of weaving supplementary weft (crosswise) threads into a piece of handwoven fabric, and after weaving, those threads are drawn up on both sides to compress the fabric.  Then the piece is dyed.  The process is basically the same as would be hand stitching drawing-up threads into a piece of commercial fabric, gathering up those threads and then dyeing the fabric.  With woven shibori, the draw-up threads are woven into the fabric right on the loom.  The hand process is called mokume, and in either case, those threads are later removed entirely after the fabric has been dyed.

It looked vastly different from this when it was originally finished as a scarf.  The colors didn't work for me.  So I began discharging the color out and overdyeing it multiple times, using different shibori techniques each time to create the final fabric.  Lastly I added gold pen squiggles and foil squares.

I decided after all to read the entire Inspector Lynley series by Elizabeth George.  I just finished the prequel, A Suitable Vengence.  It took me longer than usual to read, not because it was exceptionally long, but because I got bogged down in the family history stuff for the initial 100 pages before the first murder occurred.  It was clear sailing after that point.  I'll probably never get over the fact that in the books, Thomas Lynley is a blond, while protrayed in the TV series by Nathaniel Parker, Lynley has dark brown hair.  In my mind's eye, Lynley will always be dark haired.  So be it.

And guess who baked another cheesecake yesterday?!  (I.H. ~ I'll bring you a taste this afternoon.)

That's all the news for the moment from my corner of paradise.  Have a great Friday.  xo

Those are gorgeous Connie!

Beautiful piece of art. And the colors are so you...

Beautiful work. I can see why it is your favorite, so lush. Elizabeth George, well I've read almost all of them, many thousands of pages later, but I really like her characters. Hope you enjoy them. I used to read lots of Brits. Now I am addicted to Scandinavian mysteries and have been reading them the last several years. Add Henning Mankel to your list. The library is sure to have them. xox

This is a beautiful art cloth ... The colors are amazing and I so like the addition of the foil squares!

Once again, you've introduced me to something I was unaware of - woven shibori. Makes perfect sense! And this is a beautiful piece.

Must share my own Inspector Lynley story, since I went at the Elizabeth George novels first and the series second. I can't remember how I got on to them, but was so delighted when I discovered one of my good friends was also a fan. So we'd read a book and then discuss. Imagine our excitement when we learned they were to be made into a series for PBS - we could hardly wait!

Well, as is so often the case, casting did not stick to author descriptions, as you note. While I had liked Nathaniel Parker in other things, he just did not fit my idea of the inspector - and it wasn't just the blonde hair. Ditto on my vision of his female sidekick, Barbara. But I had no idea if my friend would feel the same.

Oh yes she did! We both had seen in our mind's eye as we read, an inspector looking like Ashley from Gone with the Wind. I don't think we ever made peace with the choice of actor who was so different. But that didn't keep us from watching the show!

So you and I had the same experience but from opposite directions. How fun!

That sure is a lovely piece of art. You are so fortunate to be so gifted to be able to make this and things like it. You must have you self criticism button turned off when you create art like this, because it is unbridled. This button I have turned on and keeps me from being impassioned when I try to create. It is very bothersome.

Wow, that piece is beautiful!