Back In The Saddle, Sideways 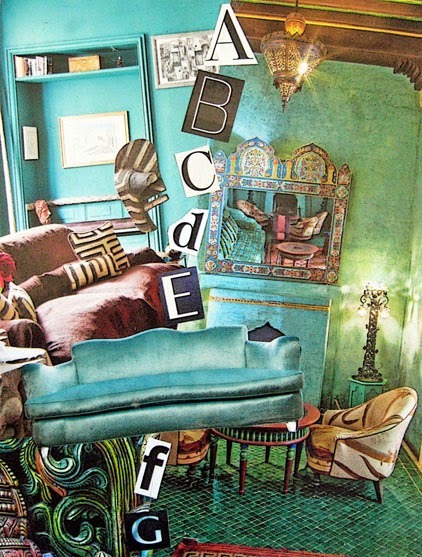 I'm not sure the title of today's post means anything...it just popped into my head.

This is my first non-neutral collage in a while, in a new sketchbook (albeit not the square sketchbook I made recently for neutral collages).  I'm big on couches, sofas, chairs ~ comfy places to get off my feet.  Quite possibly that's because I don't have a lot of options in my digs.  Although, how many couches and chairs does one need, really, as long as there's one you can call home...like my pea green sofa.

I've been cooking up a storm recently.  I've been making one cheesecake after another in my quest to bake one to perfection.  I've tried several different recipes and they've all been good.  But each time something hasn't worked out quite right.  I'm going for the texture of a cheesecake I used to bake back in the 1970s, and even though I'm using the same recipe as back then as well as others, I'm still on a learning curve.  Today I learned that the finer points of the baking part of cheesecake making are where I need to focus now.  Once I have it all together, I'll post my recipe along with the necessary tips to ensure success.  If only other recipes gave you the whole story...but now that I understand the science behind it, I think the next cheesecake just might be that perfect one I've been trying for.  Meanwhile, I've enjoyed eating and sharing my "failures."

Recipes and knitting patterns have a lot in common.  Over the years I knitted up a couple of ranch houses instead of sweaters because I followed the pattern exactly without visually walking through it beforehand.  Sewing patterns, too.  So many patterns are abysmally written, kind of like the instructions you get for assembling things made in other parts of the world, where the manual was translated by some non-English speaking outfit like Bing.

Although with recipes it's more like, if you don't inherently understand why things work together or how things work, i.e., the science, then a lot of success is just beginner's luck.  And I've certainly had my share of beginner's luck with creative endeavors.  Who could've imagined that when I talked a couple months ago about wanting to go deeper into something that it would turn out to be cheesecake.
Posted by Connie Rose at 4:44 PM

Truly ironic! You are bringing back memories of my home ec class in junior high school. We were not just taught recipes and how to shop for them but why you did certain things in a certain order and what ingredients caused things like biscuits and breads to expand. Cooking and baking ARE science and it's a shame those things aren't really taught anymore.

Oh, you make me smile!
I love baking, and cheesecake is a favorite because of all the diversity of ways you can tinker - from crust types to toppings of various kinds. My best-loved recipe is the New York cake in the Joy of Cooking.
Happy days of summer to you, connie (like this collage, too btw).
-sus

I would be disappointed if you hadn't delved into the science of cheesecake! And I'm so glad, because I know I'll benefit from your research! :-)

Now this captivates me, too! Lovely!

I keep coming back to this collage. The elements are so nicely integrated, and the off-kilter composition gives me a sense of vertigo. It's so compelling.