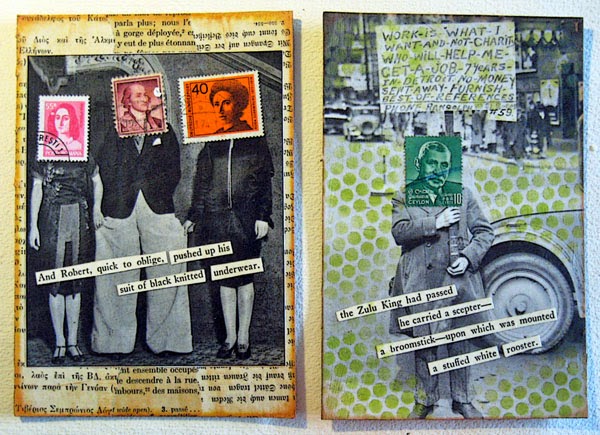 On Saturday I made 15 or 16 stamphead postcards.  These all are some of the best.  They vary in size slightly.  As with the ATCs made recently, these were a lot of fun. 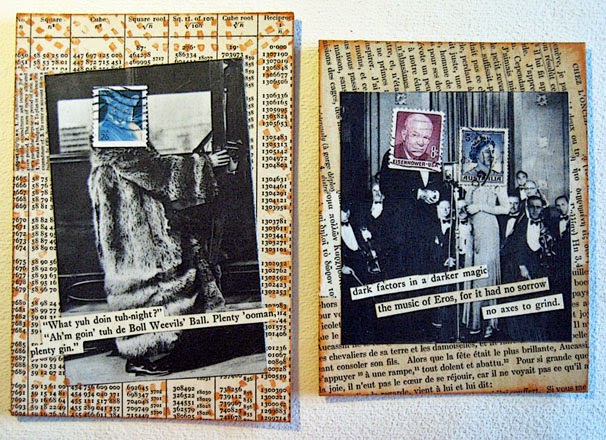 When I make these things, I always have the photo or ad, the stamps, and usually the foundation paper selected beforehand.  And sometimes also the words.  Then I can easily assemble a bunch at once. 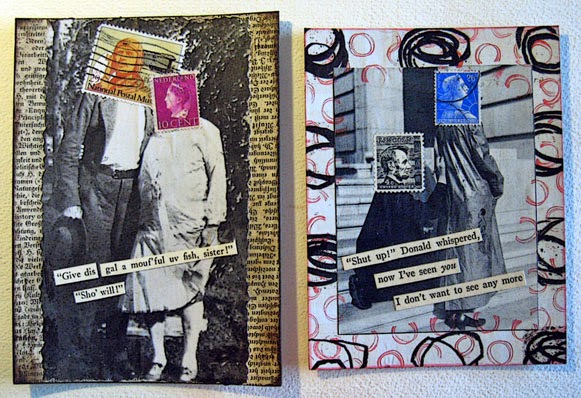 The old gal in the photo just above is Ma Barker, a contemporary of Bonnie & Clyde, although she was old enough to have been their mother. 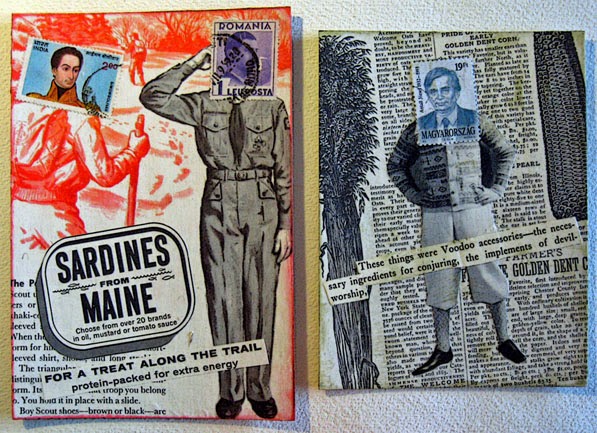 My reading has slowed a bit for the moment, although I've got a stack of books out from the library.  I recently joined Netflix (I know, finally got with the program) essentially to watch foreign films...beginning with all the films starring Mads Mikkelsen, my new fave actor.  Mads is Danish, and although he's been in several American or British-made films recently, as well as American television, most of his movies are in Danish.  So I've been having myself a Mads Mikkelsen Film Festival right here at home.  If you're not sure who he is but you saw Casino Royale, Mads played Le Chiffre.  And he's currently starring in NBC's Hannibal (which I tried to watch but is way too gruesome for my taste...and to think they put this stuff on network TV these days.)

Five more days 'til the summer solstice ~ which for me means, five more days until the days start getting shorter again!  Autumn lover that I am.  xo
Posted by Connie Rose at 9:54 AM

Email ThisBlogThis!Share to TwitterShare to FacebookShare to Pinterest
Labels: postcards/ATCs

I wondered how long you, or any of us, could do Hannibal. Creepy to the max.

So glad you have netflix!

Your Stampheads are great--where do you get the stamps and the pix???

Well, you've certainly mastered the art of stamp heads - these are all very cool. Especially the ones with more than one person in the picture. I need to try that. Ike and Queen Liz cracks me up.

These are all wonderful Connie!
I do believe you can and do
do everything well!

Thanks for the winning ATC and the exquisite envelope too pretty to open, but I did. ;o)

I love the stamp heads! And I'm so pleased I've discovered something to do with all those stamps featuring people that I rarely use… heh. It delights me to see them magically transformed by your artistry! These are great!

Fantastic! I especially like Robert up there on top! What a hoot!!!

You are having way too much fun with these!

I love the quirky unexpectedness of all these ... great fun to look at as well as to do.

Just more brilliance on your part. I got one in the mail today and love it and feel so lucky to know you, Connie! :-)