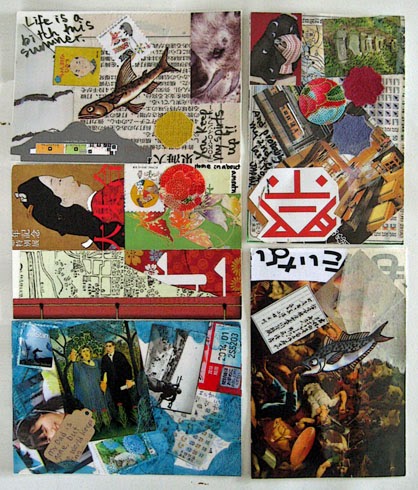 Today I'm featuring just some of the work done by Meg Nakagawa, from Nelson, NZ.  Meg's blog is Unravelling ~ primarily she is a weaver, but she is multi-talented and becoming quite the collage artist as well.

These are a few of the postcards I received from Meg over the last year.  And below is what she calls an inspiration packet, a bunch of inspiring cards and snippets sent in one package.  An inspiration packet is like mail art on steroids.

I wanted to begin this series with Meg because she was my first online pal, and we've been in touch in numerous ways across the Pacific for nearly seven years.  It all began when I lived in Eureka, and Eureka's sister city was Nelson, NZ, and I was a weaver at that time, and somehow the fates brought Meg and I together.  She's also become a dear friend. 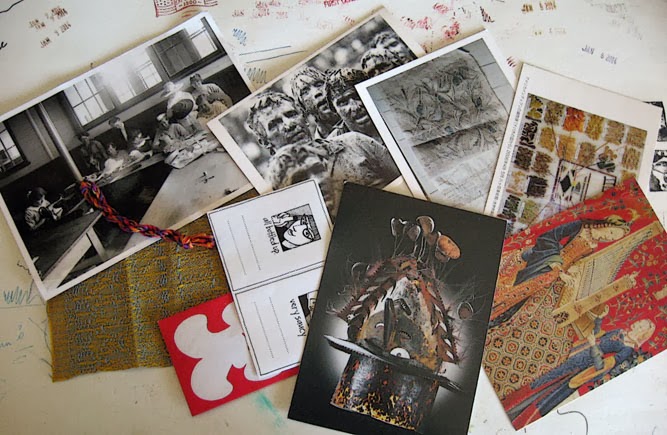 What a great idea and thank you for sharing Meg, I have added her blog to my list. I do believe weavers are inborn collage artists, not so sure it works in reverse? ;op

Oh, blush, Connie!! Still, I have to admit it is interesting to see my postcards in one place - I've just been doing the same with what I sent Ben. I have no designs when I collage as it is a mental health exercise, and I don't remember what I've done once they are addressed and stamped. But being in Japan was visually most stimulating and I am a bit worried I may loose my momentum now that I see only the same-old stuff here. I think I need to add to my skills a new way to see/use the material I can get my hands on.

I like her postcards and I'll be curious to see how you use the things she sent you. I need to make up some inspiration packs for some of my mail art pals!