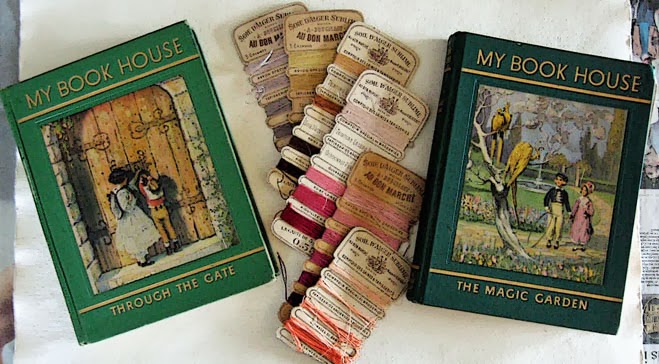 I've always loved flea markets.  The farther north in California I've moved, though, flea markets have become scarce and rare.  I long for the days of the Rose Bowl Flea Market in Los Angeles ~ although my experience of this beauty is from over 40 years ago.  When I lived in Santa Cruz, I regularly attended the weekly Skyview Drive-In flea market, both as buyer and seller.  When I lived in San Francisco, the Marin Flea Market, which was in Marin City and after many successful years was booted out to make way for a shopping center, was a fairly often Sunday morning jaunt.

Since I've been in Humboldt, there really hasn't been much in the way of flea markets...although the Humboldt Flea Market in Eureka just recently became a regularly monthly affair.  So I attended last Sunday, and the photo above shows what I found.  Two old children's books for a song, and gorgeous silk threads straight from a Paris flea market just a few weeks prior.

Pretty much the same goes for thrift shops in Humboldt ~ littered with true junk, of the crap variety, and if you do find anything worth buying it's usually priced for an antique store.  I've actually found a few things at one or the other of the Fortuna antique stores for less money than those same things are selling for at thrift shops or the flea market.  Gotta keep your eyes open.

Since I started making books, I've begun collecting books as well, ostensibly to alter.  Most are too cool to tear apart, though...which is becoming a problem, because I have so little space.  I'll show you some of the books I've recently collected, on Saturday.
Posted by Cate Rose at 9:16 AM

My space is maybe less cramped than yours, but I also have to be careful how I use it. I don't like too much clutter and keep everything to a minimum, unless I am truly in love with it. I have space left on the bookcase and can look for some interesting items for it. They have to be colorful, though. xox

Great finds. What you gonna do with the threads? I ask because I have a bunch of oldies myself. Now that I no longer use them up in crazy quilting, they're just languishing in the drawer. I'm thinking to use the packaging in mixed media and maybe do some simple stitching pieces with the threads themselves. My arthritic hands can't handle anything tough.

Really nice post! We are on the same wavelength on a lot of levels. Thanks for your blog, I always enjoy it.

I'm a junkie, too. I MUST do something about organizing (and discarding) some of chaotic conglomeration. Like you, I'm reluctant to tear up certain old books, but they can be scanned for use without tearing them up. Hence, I have scanned images AND the old books. Can't wait to see some of your collection. :)

OhLaLa -- J'aime that french ribbon! Who doesn't love a flea market? We don't have any good ones in SF but Alameda Flea is still good and sometimes Treasure island....

Is there much in the way of anything in Humboldt? ;-)

But even in Humboldt, sometimes you can find opportunity where you least expect it. I was on the HSU campus a few years ago when the library was decommissioning a bunch of books. Two big skips full. Hilariously outdated psychology, gynecology… lots of fun stuff to tear to pieces. (I was more into altering back then.) I backed up my car as close as I could get and hopped in… Probably goes some way to explaining the…. um…. Hoarder Nouveau decorative motif in the studio. But, as you know, opportunities for productive magpie activity are sparse around here!

That said, those are great looking thread cards!

Great finds. Flea markets are very rare here to and our Charity shops (thrift stores) are full of highly priced rubbish too.

I was 5 when Santa brought me the entire set of My Book House in the blue bindings. That was the best Christmas I ever had! I spent years reading them over and over. I still have all of them except for one volume. They're not here at the cabin, so I can't remember which one I'm missing. Wouldn't it be cool if you have the long lost one? Sweet memories!!!

I went to the Long Beach Flea Market a year ago and was captivated by it. We don't have much in the way of flea markets in Seattle. There are a few sparse ones on occasion. We use to have a monthly one but that ended when the building was condemned by the city. Love you finds. I have to say I do find things at garage sales.

What a wonderful score!!! I love old books and the thread - wow!!! I am with you on living in areas that don't have good flea markets. We have one good thrift store that really is a thrift store, but I have better luck at the antique stores. Have fun with your treasures!

I buy fabulous old books at our local library's used book sale (once a month), usually for $1-2. I laughed when I read your words about buying them to alter, but…. I have the same problem. Some of them just seem too nice to cut up and/or paint over. I need a program for letting go, I think, because things are beginning to pile up here.

I have a feeling that you and I were roaming the Rose Bowl flea market at the same time. I hadn't been there for years until about a year ago. The "antiques" were relegated to a small section, which come to think of it, made it easier for me to get through, Happy hunting, Connie!