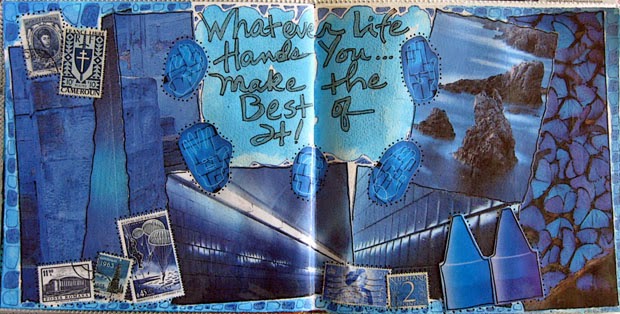 Here's my turquoise indigo spread for the Rainbow Escape challenge.  The technique was to use fancy hand lettering with a brush or calligraphy pen.  Believe it or not, in my entire pen collection I don't have a single calligraphy nib.  So I used a brush pen with my own cursive, which I rarely use on journal pages.  The saying, "Whatever life hands you...make the best of it!," was inspired by those neon hands surrounding it.

An interesting note here ~ that Christmas stamp, in the center of the lower left cluster, is from 1963...that was 50 years ago, shortly after JFK was assassinated, and just a month and a half before the Beatles appeared on the Ed Sullivan show.
Posted by Cate Rose at 9:29 AM

Sorry I have been such a poor viewer this week. The pressures of family and Christmas preparations have prevented my enjoying the pleasure of other people's blogs - and my own!

I love all your rainbow escapes and also your nature journal with that beautiful cover that I somehow missed when you posted about it before (perhaps this was before I became an avid follower of your lovely blog?)

Although I am less fond of the color blue, which I should not be considering Delft's Blue, I do like this warm spread with your cursive writing to give it a personal note. And it does belong in the whole color range, so as an addition it is perfect.

Blue! Or rather - blues! Such a good color. I've been fascinated by the differing items you've found in the various colors. The butterflies are neat. Those crayons keep popping up. Cool spread and good advice. Something I have trouble with lol.

I have been enjoying you rainbow challenge pages Connie.
-sus

Yes, this is a winner!