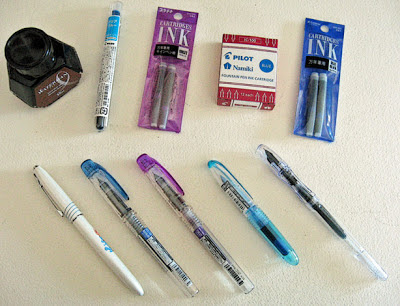 Just a few weeks ago I thought it might be cool to use a fountain pen again ~ and now I've got five.

Initially I used fountain pens in high school, when I learned shorthand.  Yes, younger readers, when I was in high school they taught things like shorthand to girls like me who were planning to work right after they graduated.  Those were the days when dictaphone machines were only just becoming cutting-edge technology.  Dated...I know.

Subsequently I went to college/university and my jobs never required that I use shorthand.  I gave up on fountain pens when I couldn't take class notes fast enough with them.  I might have used shorthand in class, but never considered that as an option at the time.

My latest interest in fountain pens was sparked by one of my penpals (Gini from Virginia) who writes consistently with fountain pen and has the most beautiful collection of ink colors I've seen.  She also turned me on to the Fountain Pen Network, of which I might be the newest member.  Heck, why not?!

Anywho...with the exception of the white pen on the far left, which was a recent gift, the rest of these were quite inexpensive, so I'm trying different pens to see which work best for me (also to have options?).  Actually these all write well.  The transparent barrel ones are all Pilot models, purchased from JetPens.  The ink and cartridges are from there as well.

So...something new to be into, new stuff to find a place to house in my studio, and so it goes.
Posted by Connie Rose at 7:57 AM

That's my theme song. If one is good, 5's got to be better, right? If you have a Staples nearby, keep an eye on their coupons (found online but mostly can be used in-store) cause they often have 50% off any Pilot product, or sometimes Pentel. I get most of my pens there at half price.

this brings back the fascination of watching the ink flow out of the pen I enjoyed as a younger me. I will go in search of a fountain pen this week - always looking for the smooth line with the least drag. love dropping those little cartridges into the chamber and having a full tube to write with. I love looking at vintage shorthand books, the lines are so intuitive.
now I am inspired to return to mail art, it has been awhile... there are some weird postcards I almost got - Jane Austen zombies and LemonySnicket movie - but didn't. may go get them and alter them to reflect my intentions better, it will be a challenge to enjoy! people love getting mail, truly one of life's simple pleasures.

i love fountain pens....but I am mad Schaeffer (sp??) discontinued the old cheap cartridge versions I used for years and years...they still make them for calligraphy but I just like the regular version....

loved your post..I have to get a few..my mom did short hand as a secretary :) I didnt ever take it in school, tho I could have. Paralell pens are also so addicting!

I'm all for this new addiction of yours. Have fun with it!

We're running on parallel tracks again! Love the fountain pens. Have you discovered Gouletpens.com and the amazing (and affordable) Creaper pen? It writes a very variable sized line. And the inks...