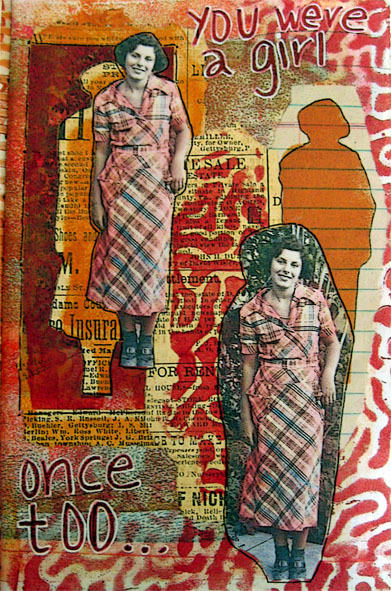 The young girl in this collage is my mother in 1935, when she was 13.  It was taken in Miami Beach.  The original photo was hand colored.

Despite the fact that my mother and I never had a relationship that gelled into anything positive and that I had not been in contact with her at all for the better part of nearly 30 years (she died this January), I do have a small number of old photos of her to use in artwork.

Below is a quilt I did in 2010.  These images of her were taken at the same time as the photo above.  The central image was printed on muslin; the other two are actual photos stitched onto cotton fabric. 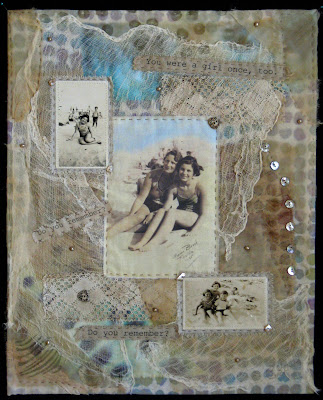 The sentiment in both, "You were a girl once, too," refers to the fact that by the time I was a young girl, mom seemed to have completely forgotten that she was also young once.  My teen years were hellacious times brought on by the early stages of my mother's madness.  I never had the opportunity to have a joyful, loving start in life...

...which segues into the phrase probably most of us have heard by now, "It's never too late to have a happy childhood."  Art making is giving me that happy childhood now.
Posted by Connie Rose at 9:26 AM

Thank you so much for sharing such a painful part of your narrative.

This IS a painful story of how family doesn't always provide the love and support needed.

We can't pick our parents and it sounds like you should be proud of all of your accomplishments based on what you went through.

Looking at your Mother's face, I wonder what went on in her own life at the time this was taken. And before. I have photos of my own mother in her youth. And I wonder the same things...

I think it's wonderful that you've found a way to have that happy childhood. You and I have a lot in common, regarding mothers, so I really respect the way you're handling that lack of a maternal bond. At times, usually before we're ready to be so, we're our parents' parents. And at other times, we're able to capture childhood out of sequence. Good for you!

It is just like you say it was, our mothers were mad because what else would make them behave so unkindly towards their own children. A normal person would not do that. It is best not to spend too much time thinking about her, unless it is a puzzle that you are trying to work out. You don't ever have to forgive her, so you don't carry that burden.

Beautiful. There came a time in my life that I realized that no matter what I did, I was never going to measure up. This was very sad to admit and embrace, but at the same time freeing. So I am now being as authentic to myself and I can be. Does this cause wave within the family? You bet, but I cannot live my life for them. xoxo

Touching, and very good 'work' for you to do. I don't know what you went through, but you have certainly survived and are now blooming in your very own garden!
As someone else said, thanks for sharing this part of your life.

To me she looks older than 13. And happy, I think. It is so curious to think about our parents when they were young, before their own demons and/or life experiences molded them into adults.

You have survived and now thrive, I think. I so agree about having a happy childhood at any time. Brava!