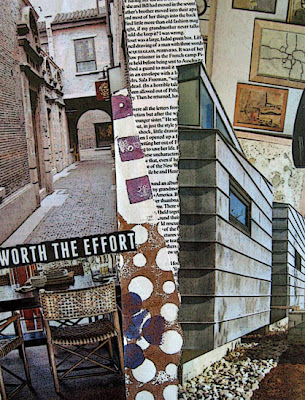 I've been thinking about this for a few days, so I'll blather on for a bit.

I'm reading a great book called The Zen of Creativity - Cultivating Your Artistic Life by John Daido Loori who's an American Zen priest.  It's more about getting out of the way and letting art make itself through you, than anything else.

Even though we're all artists in our own right, and even though so few amongst us develop recognizable names and styles, I used to hope that someday something I created might amount to more than a handful of compliments and the occasional sale.  I hoped I'd do something "important."

I think more than anything else this hope was driven by my need to let the world know that I could do "it" too, that I was skilled, that my work was as valuable as others' work that gets oohed and aahed over and purchased at often shamelessly high prices.

As I not long ago pulled away from actively marketing my artwork, and spent much of the last several months wondering why I bothered making art at all, I finally arrived at the place where I'm feeling comfortable and inspired to make art just for myself.  In other words, because it's "important" to me.

It's hard for me to relate to being an artist who found her medium eons ago and has stuck with it since.  Perhaps that's because I've always been interested in too many things to settle on just one.  I like the idea of branching out and moving on.  I want to experience a lot of artmaking in this lifetime, and I can't imagine choosing a medium and sticking with it for the duration.  At the same time though, part of me wishes I were the other kind of artist, the one who's developed a lifetime body of work in one medium and really has something to show for her devotion to creative expression.

But that's not me.  I want to try a lot of things.  I want to keep spreading my wings.
Posted by Cate Rose at 9:17 AM

I couldn't agree more! Art is a journey, not a destination (or a product)....

Very well said, Connie. I also wish I could settle on one medium, but the hummingbird in me wants to find the sweetest flower. So, I go from one area to the next. I guess my natural curiosity and need to learn keep me from creating a body of work in one area. I am okay with that. The ability and desire to learn is what feeds my soul. Wishing you a beautiful day. xo

If you have as much stash as I do, it's hard to move on to something else. LOL. But seriously, if you look at some of the "famous" artists, they did do a lot of different stuff, but possibly because only certain art forms were acceptable or prestigious, they are known as makers in that discipline, it appears. Some like Vincent stuck mostly to painting, I think, but then Matisse tried a whole lot of methods to make pictures, and nowadays an artist may be known as a painter OR printmaker OR architect/designer OR something else, (can't remember if he did 3D,) but will try his/her hands on at least a few things, I think. So while I understand what you mean, (sometimes I feel the same way about having lived in one place for a long time,) maybe you can relax and just make and let people decide which boxes they want to put you in?? If you know what I mean?

I am getting into mixed media for fun, too - but drawing-based. The pleasure is so immediate compared to weaving, but now I'm having to learn to a) not overwork it, and b) revisit it.

I hear you. I do the same as you can tell from my blog-thanks for commenting on it. I do art because it makes me feel complete. I do art, because it satisfies me.

As always, you are a trailblazer, putting yourself out there AND sharing. I tip my hat to you...and I thank you! (Little bow from me--not a curtsy, just a little bending it.)

You are much too multi-talented to stick to one medium and frankly, I don't think there is any need to do so. Everything I have seen of yours, from the weaving to the surface design to your collages, has shown what an artist you are. Just keep following your instincts and your work will tell you what it wants to be.
xo

I love this post! I think it speaks to many of us who wanted to be one of those famed artists, but truly... just need to follow the muse to feed our soul! I look at my creativity as a gift from my Creator... something I can turn to for sustenance and joy. Oh, I get frustrated sometimes from not being able to accomplish what I want, but nothing gives me greater happiness than working creatively. I have gone the gamut of mediums over the years, settling mostly into the dye area, but that doesn't mean I won't evolve into other areas as well. Meanwhile, I may just get that book... sounds interesting!

Hi, Connie - This is a great post, echoing many of my own musings regarding what is 'important' about my art... and as one who has explored many different mediums and continues to do so, I always find joy in the way the progression plays into what's next. Keep on morphing! -sus

I love the process, the feeling of removal from time, the absolute involvement with the moment (things that are not judged) much more than the product which others will either like or not like. Which doesn't mean that I wouldn't like having my work sell because that is an acknowledgement of value. But the best part is the process that pulls you into a separate world and gives such a sense of purpose.

One thing always leads to another, though, and experimenting with different mediums and techniques is part of creative growth. So...it is a pleasure to watch you spreading your wings.

why does this post seem so familiar?
thanks for writing it. i am not alone.

Keep on spreading your wings, its the only way. I identify with most of what you say - we are who we are,but sometimes its difficult to hang on to a sense of purpose.
I hope you find the right 'balance'.