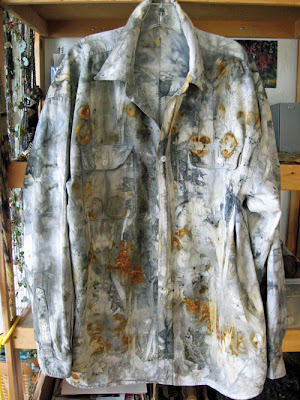 This is the big cotton shirt I bundled last week with large oak leaves and rusty objects.  It sat for four days after steeping.

My original idea was to wear it tomorrow night to a dinner I'm going to, but I've decided instead to keep working on the shirt before I call it done.

I didn't get as good leaf prints as I'd imagined I would, because the fabric is fairly heavy and even with the tight bundling, I don't think most of the leaves had good contact with the cloth. 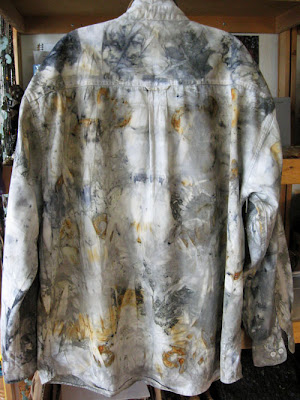 So I plan to over eco dye it again, and find a better way to get the leaves to print on the fabric.  Because there's a lot of residual rust in the cloth, I likely won't add any more to the next bundle.

All in all, though, I'm certainly not dissatisfied with the result.  The shirt is still pretty awesome, considering.  I really love the shibori-like effects from the folded and bunched fabric.

I also don't want to wear it until it's been washed.  And I'll let it sit for at least a month after I finish dyeing it before washing it.

I also plan to replace the buttons and likely do some stitching on it.  It might be one of those never-ending projects where I alternate times of wearing with times of working on. 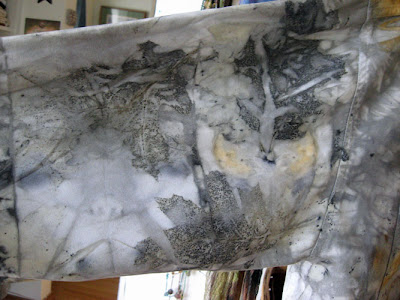 Connie i must say that i really like it very much as it is. I would wear it once, wash it and then overdye it again. You lose nothing.....
Looking very much forward to the continuing story of this shirt.
XXXm

Fantastic marks. I love the idea of it evolving.

Gorgeous! Connie, you have really created some beautiful cloth this year. Have a fun weekend.

I like the way the shirt turned out, but I also like the idea of the shirt evolving with new buttons and embroidery and what ever else you can think of. I like the fact that it will be a work in progress and that we will be witness to it. I can't wait to see how it will turn out next. Be sure to keep us posted. XOX

I love the way it looks now but you can see the real thing and know what you want to achieve. Looking forward to seeing the shirt when finished...when ever that is. I have shirt that is similar in the way it has become an "ever on going" project.....x Lynda

I love this! It's soooo beautiful. Brava!!!

This is a wonderful example of eco dyeing! You have been doing beautiful things with this process... can't wait to see more progress on your shirt!

Wonderful shirt just as it is.

Always surprising in the very good sense of the word!

Ooooh, love the shirt. I think stitching on it would be really neat. By the way, you guessed right about the bidet!
best, nadia