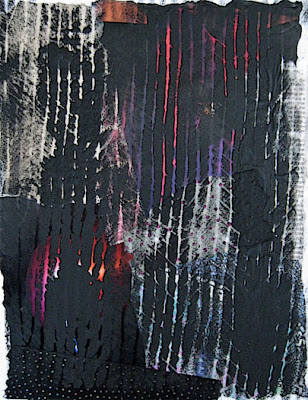 I'm changing things up a bit -- daily collages will be posted on this blog from now on -- instead of on their own...which I'll still have for the archived collages...but which won't be posted to any longer on a daily basis.

If you haven't been following them there, I hope you enjoy them here.

...part of decompartmentalizing myself...
Posted by Cate Rose at 1:24 PM 4 comments:

Email ThisBlogThis!Share to TwitterShare to FacebookShare to Pinterest
Labels: collage 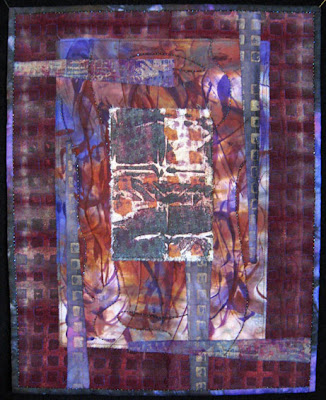 A new quilt, that's Something to Celebrate.  And that's the name of this quilt.  It measures 20.5 x 16.5 and is made entirely of recently surface designed fabrics.  You may remember seeing some of them individually as they were created. 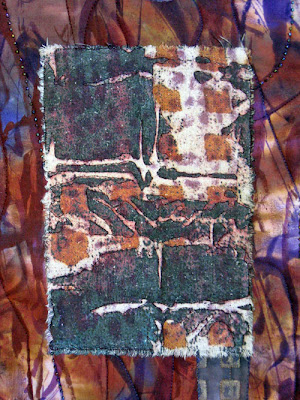 I'm not yet back to my "old self" energetically.  My back is still bothering me, I've been on pain medication (as little as I can get by with), and will finally see the acupuncturist tomorrow.  So things have been coming slowly...but they're coming nonetheless. 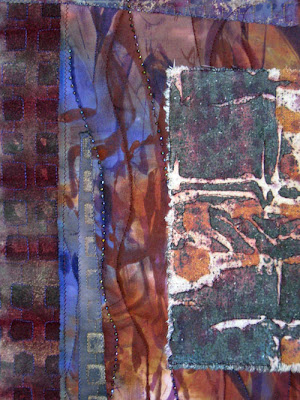 Being away from quilting for a little while and then getting back to it this past week made me realize all the more how much I love working with fabric.  My forays into working on paper and canvas will never supplant surface design on textiles.  Of that, I'm certain.
Posted by Cate Rose at 10:15 AM 3 comments: 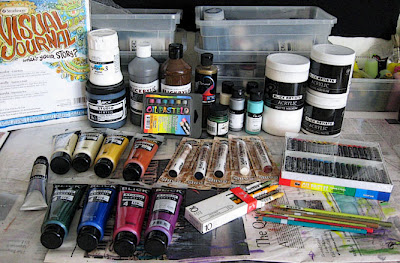 I finally had the energy yesterday to unpack that carton of goodies from Dick Blick that I'd ordered recently.  Lots of cool stuff to play with.  I'm hoping to do some experimenting this weekend.

Not much else is new ~ but glad I'm feeling a bit of creative energy bubbling again.  That's always a good sign!
Posted by Cate Rose at 9:44 AM 5 comments: 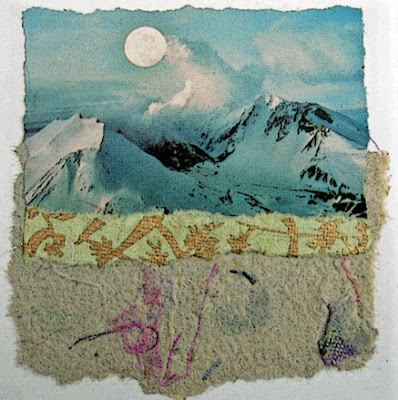 Departure is the word I chose for Fiberations' latest challenge.  I just decided to invite my blog readers to join in the challenge if you want to.  The reveal date is July 15.  If you decide to play along, then comment on my blog post of July 15 with a link to an image of your quilt.  Then I'll post links to your images in a separate post right here.

de·par·ture (d-pärchr)
n.
1. The act of leaving.
2. A starting out, as on a trip or a new course of action.
3. A divergence or deviation, as from an established rule, plan, or procedure:
ordered curry as a departure from his usual bland diet.
4. Nautical The distance sailed due east or west by a ship on its course.

n
1. the act or an instance of departing
2. a deviation or variation from previous custom; divergence
3. a project, course of action, venture, etc: selling is a new departure for him
4. (Transport / Nautical Terms) Nautical
a. the net distance travelled due east or west by a vessel
b. Also called point of departure the latitude and longitude of the point from
which a vessel calculates dead reckoning
5. a euphemistic word for death

With "departure" as the theme, I'd like to suggest that if you're so inclined, you can depart from the normal dimensions for this piece but stay in the vicinity of 320 square inches (20x16). So 300 to 340 square inches.

Hope you'll decide to play along ~ having other artists participate would certainly be a "departure" from our normal operation.  If you do, just send me a comment as a heads up!
Posted by Cate Rose at 10:16 AM 6 comments: 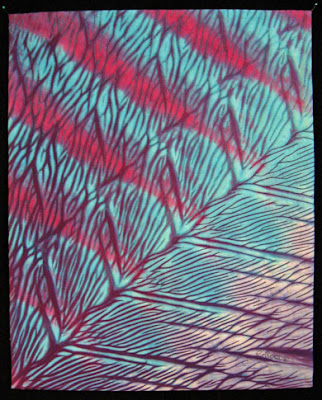 Today is reveal day over at Fiberactions' blog ~ our theme this round was "embellish."  My finished quilt, 20x16 inches, is called Wings.  This is a wholecloth fat quarter of jar-shiboried muslin.  I liked it so much after quilting that I decided not to add anything we would typically think of as "embellishment," not even seed beads!  Rather, Wings is simply embellished with thread. 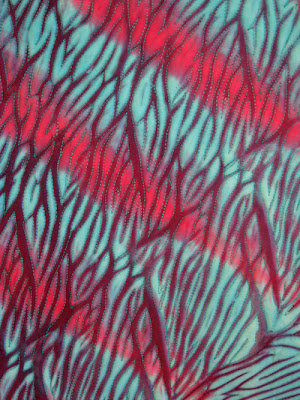 In other art news -- there isn't any!  I'm on hiatus from pretty much any artmaking for the moment, focusing on healing some minor health issues, back problems primarily. 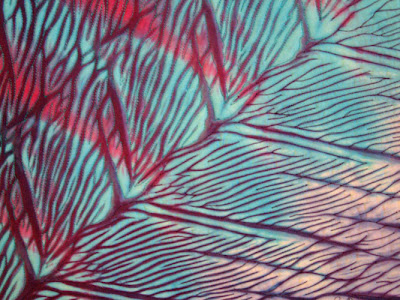 It's my turn to choose a word for Fiberactions' next challenge.  I'll be posting it on that blog tonight or tomorrow morning.  I'll also post it here.

Hope you're having a good weekend.  It's wet and drippy here again on the coast. 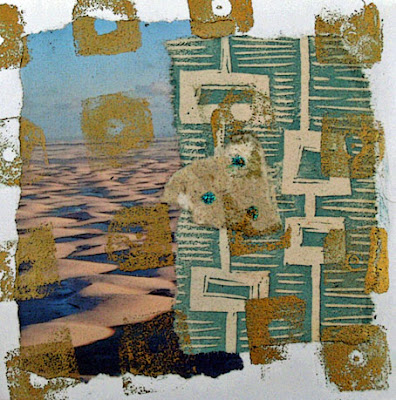 Now that it's finally really spring, I have Spring Fever big time.  I haven't wanted to do much of anything these past few days except sit in the sun on my patio and watch the bamboo grow.  That probably wouldn't be such a terrible way to spend my days, if I weren't feeling so guilty about it!

This is actually the first time in my life where I don't need to stress over earning a living.  I really can take things more easily now, I have enough money coming in so that I don't have to be constantly strategizing how I'm going to make it.  And I can see that it's going to take me a while to "debrief," to relax, to stop pushing myself, since I've been in that mode for over 40 years.

So I'm finding myself really unmotivated to make any art at the moment.  I am tinkering a bit with collage-making in little spurts most days.  But those couple of quilts that I have ready to go...but I just don't feel compelled to move on them.  It's possible things will change by the time you read this, but likely not.

The Zen thing for me to do is to just go with this transitory time.  Just embrace it, be with it, don't try to change it.  And if I write anything more about it, I'll start analyzing myself, so I won't.

The collage above is from my collection of new works.  This piece is 4x4 inches ~ I'm working in a variety of sizes, from these tiny ones up to 11x17 inches.  They'll start appearing on Collage Journey beginning Wednesday, May 4.
Posted by Cate Rose at 4:56 PM 6 comments: 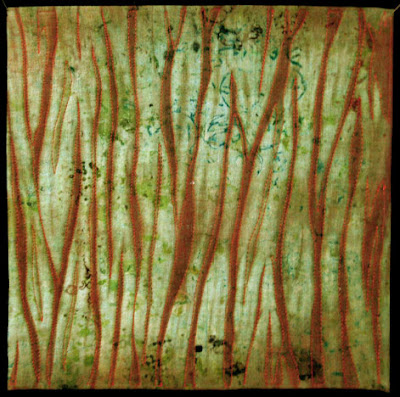 Today is May first ~ May Day, or Beltane to the Wiccans and Pagans among us.  I made this 10x10" quilt two years ago to celebrate May, and call this piece Beltane Fire.  It's still available for sale, mounted on painted stretched canvas.  See it here if you'd like to have it.

Wow, what a wonderful weekend this is being, the first really nice weekend all year.  Sun, warmer temps, breezes, sun (!)...and I'm a happy camper.  I've been moving plants around to create my little patio area outside Rose Cottage ~ will photograph soon.

I have another quilt in the works, plan to finish it in the next couple of days.  And lots more collage.  Will post new work as soon as possible.

Have a glorious Sunday!
Posted by Cate Rose at 8:38 AM 4 comments: