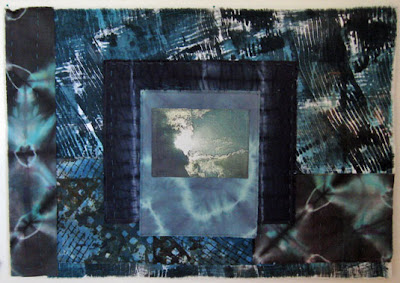 This is one of four pieces I plan to complete in January (they're all basted now) -- the four that I've mentioned innumerable times.  This little series is local art, the featured digital images taken right here in Fortuna.  The sky images themselves could be the start of another series of small works.  To see my daily sky images, check out Sky Journal.

2010 was a productive year for me in many ways ~~
As I move into 2011 my creative "vision" still seems a little murky when I try to articulate it verbally.  So I'm going to quit trying to name it, because words just get in the way.  It's evolving in its own right, on its own terms, in its own way, if I just don't try to categorize it.  I'll let it be what it wants to become and go along for the ride.

That's the spirit, Connie. :D If our art doesn't evolve organically, if we're not already living the creative or personal life that want, no date on the calendar is going to change that. I know you know this, too.

Happiest of new years to you! I hope 2011 is the year we have the chance to run into one another. :D

I agree -- words are superficial, it's the heart and spirit that count! All the best to you and BeeGee for 2011. Eliz, Hobbes and the rest of the crew!

A very happy new year to you, Connie.

Lovely piece. May 2011 bring you a continuation of the creative and adventurous journey you have recently embarked upon.

Your 2010 list is impressive. You've navigated major changes with grace and style. Here's to more good things in 2011, whatever you name them! I always enjoy reading about your journey.

Happy new year to you Connie. Looking forward to following your beautiful work in 2011
Carolyn x