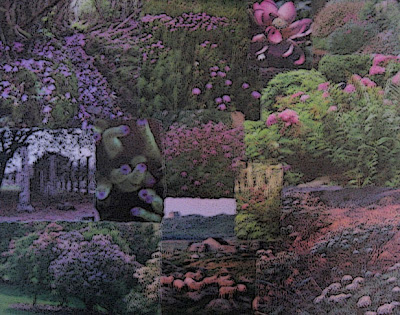 ...the sweetness of doing nothing.  Yep, I've done close to nothing over the last four days.  I'm still working on the not-feeling-guilty part.  Although I did add to the list of things I'll do to have a Brilliant 2011 (brilliance being my word for next year), tinkering more in my studio without a plan.  Not all the time, but more than I typically do.

I have made good inroads into the Monk series, though, am nearly done with season 3...totally loving it.  I've gotten back into collage in two very small journals I began earlier this year -- haven't done anything there for three months at least.  I have those four quilts I keep referring to ready to baste into sandwiches; they'll get done in January.  Made a delicious pot of chicken noodle soup with the leftovers of a Costco cooked chicken I had for supper on Christmas.  Baked my best apple pie to date and have been enjoying it daily.  Have been sleeping late (for me).  And that's about it.

It sounds like you have been spending your time very wisely and as is befitting for the holiday season. That chicken noodle soup and the apple pie sound delicious. What a treat to make for yourself. Sleeping late sounds great. You ought to do that more often. You're doing all the right things. XOX

Sounds perfect to me. A great wrap up to the year and a refresher for the New Year. Yum, chicken noodle soup and apple pie. I want some of that! There is nothing wrong with pleasing yourself. Gosh that collage is beautiful. I strive to add lavender plants wherever I can.

Apple pie! My favorite. Your days sound wonderfully sybaritic. Go for it!