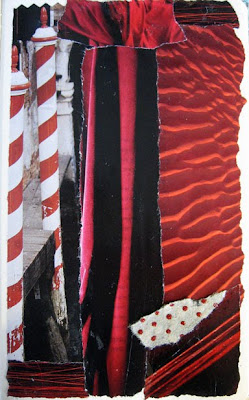 I've declared myself on a bit of a hiatus from quilt making, although just for the time being. I did baste another 12x12 Italy quilt this morning, so I have two in waiting. But other things are requiring my attention these days.

I'll be spending much of this weekend prepping for my acid dyeing workshop next weekend -- I haven't taught the class in two years (possibly three), I have more students this time and a different studio space to work in than before. So there's lots of organization and prep work to be done.

The weekend after next, my plan is to do some mono- and other printing for the next Fiberactions challenge quilt, themed "stretch" and due September 15.

The weekend after that, and primarily on Sunday August 22, I'll be working at the 15th Annual Woofstock & Mutt Strut, Sequoia Humane Society's big pet party fundraiser at Halvorsen Park in Eureka.

The only thing that's continuing unabated now is collage making, both Sketchbook Project and otherwise. The two pieces shown here are from Thursday and Friday this week. I'm parceling these collages out, although part of me wants to just fill in the entire Sketchbook in one sitting! 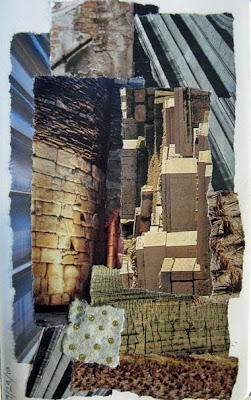 I made another trip later this week to The Art Center in Eureka, to buy even more stuff at 50% off before they closed that location, today. I got several small sketchpads and journals for really small collages.

I'm imagining an entire library of sketchbooks filled with collages...the daily one I'm working in now -- my regular collage journal -- is already number seven, and I only began early in 2009. It has become somewhat of an addiction.

I've been puttering in my studio a lot lately, too -- moving stuff around, reorganizing, straightening, finding ways to put more things into the same small space. I love doing this, and it's long overdue.

I imagine you puttering around in your studio, finding a place for everything and at the same time relishing all the work you have done so far. It must be so much fun to see your own artwork and to feel satisfied about it. It must be like a journey through time. I would love to have a look, Connie.

Busy girl! I have been thinking about what to do to rearrange my studio, but the task is a daunting one! My room is 10'x11' with 2 doors, a window and built in shelving... doesn't leave much room for moving my work tables and sewing machine around! I need to purge my tools and supplies, I think!

I LOVE LOVE LOVE the top photo! Maybe it's because it's such a gray misty day over here; maybe because I was stunned by the soft pastel colors over at Lynne Bruning's blog.

I love the use of blue in the second collage and the post below; the blue is magnificent - I really love it. Happy puttering!

Good luck with your class... I'm sure it will be great. Wish I could take that class, I stink with acid dyes, I always make a terrible mess and then the dyes wash out to dull, uninteresting colors.

You're so busy. The collage are great. Glad you like my first "stretch" piece.

WOW those are amazing. It must be great to have your own little studio.