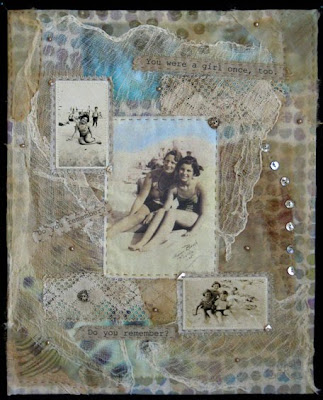 Today is the reveal day for Fiberactions' memory-themed quilt...and here's mine. Pretty early on in the creation process I decided I wanted to build a quilt around old photographs...and I found these of my mother and grandmother (and other people I never knew), taken on the beach in Miami in 1935. 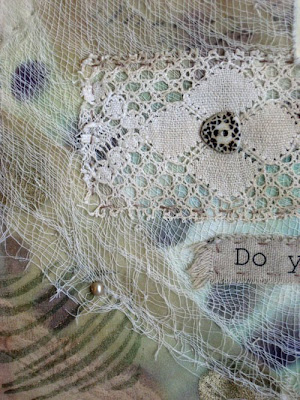 The quilt is called You Were A Girl Once, Too, and I meant it as a remembrance, on behalf of my mother, who in her late 80s has Alzheimer's, that she was once young, near the other end of her lifetime, before "life happened" and she became someone she may not have wanted to become. 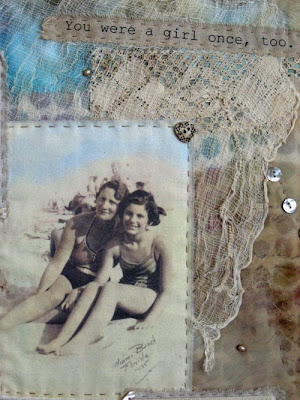 The foundation fabric is one of my earliest printed heavy cottons that always had a faded look because the dyes weren't strong enough. But I knew eventually I'd find the right quilt for it. The central image is printed on muslin, the other two small photos are actually sewn onto cotton for stitching onto the quilt. The lace, cheesecloth, silk organza and poly sheer fabrics were all tea/coffee stained before digitally printing or stamping. Freshwater pearls, pearl beads and pearl buttons were added after quilting. And this piece was done completely by hand, no machine stitching at all, with running stitches and embroidery floss.

The most interesting part of making this quilt, though, is that I divorced my mother and the rest of my family about 10 years ago -- after my own virtual lifetime of trying to survive "the mother from hell" and all of the ramifications thereof. Although I had forgiven my mother in my heart, admittedly forgiveness is an ongoing process, and making this piece has softened the hard edges around the whole family fiasco and how it impacted my life.
Posted by Cate Rose at 7:20 AM

A wonderful piece of work Connie. A tribute to both you and your mother and to the resilience of the human spirit.

This piece has such depth! I think it is one of your best, and that is saying a lot, since I like all the pieces I have seen. Your work just continues to get better with each piece! And hopefully it gives you a measure of comfort and release, as far as the 'Mother' thing... we all have to make peace with our past, don't we?

Art is therapeutic for all involved and this piece is filled with meaning. I think it will speak to a lot of people. Congratulations, it's fabulous!

Wow, sweetie, your sorrow has created a beautiful piece of art. I love how you used the bits of ephemera and the bits of blue add so much to the whole image.

It is a beatiful piece Connie. It stinks how Alzheimer's can rip apart a family. My mothr-in-law left her whole family & moved to Florida after 53 yrs of marriage. She refused to talk to anyone but my husband, & believed her husband & daughter were all against her, when it was her Alzheimer's that was the real problem.She died among strangers years later, leaving her family feeling abandoned & confused. I keep reminding my Sister-in-law itwas the disease that took her mother, that she should try to focus on the appy times before her personality was s affected.

This quilt moves me almost beyond words. My relationship with my mother was a struggle, but nothing like you have told me about yours. Now that my mother has Alzheimer's, she is so sweet to me. I wish she could remember her childhood and tell me about it.

This is a very beautiful piece of work. I love how the delicate colours and gauziness of some of the textures evoke the feelings of memories.

This is an amazing interpretation of your feelings/memories of your Mum. I love the use of the cheesecloth and pearls in particular to go with the beach/water elements. The lace with the photos just completes it. Funny....I am working on a very large piece of my mothers hand work on a white background. I have to add lace, ribbon, beads and stitches from the stash my Mum left behing. In the mean time I have been imagining a smaller piece with photos and ephemera. My mother WAS the Mum from Hell. Working with her bits and pieces is helping me to come to terms with some of the aspects of our relationship. Thanks for sharing this intimate look into your memories.

This is a beautiful piece, made even more poignant by your story of family relationships.