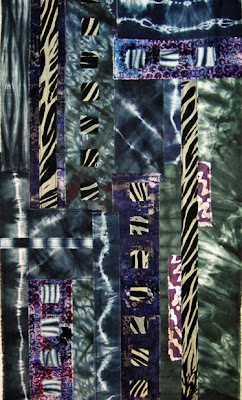 This is a new piece I'm working on, that I began putting together the other day -- a day that started out feeling kind of hopeless for me -- hence the title will be something about hope.

I almost decided to abandon my monthly photo-to-fabric quilt challenge beginning this month -- until I blocked out the first piece yesterday. I do think, though, that I'll be using two photos each month from now on, rather than doing two interpretations of one photo...and giving each one my very best shot.

I'll be doing some new work with thickened dyes today. Most of what I did in the past was fairly ad hoc -- i.e., I made it up as I went along, trying a little of this person's recipe or procedure, a little of that person's, and some of my own. Kinda the way I embarked, originally, on dyeing with fiber reactives.

Although I liked what I produced, the process was rather disorganized. The grand spiral has brought me back to the beginning again, albeit from a higher place of awareness about the process. I'm working with Ann Johnston's Color by Design, which I highly recommend. I also love Ann's Quilter's Book of Design, 2nd Edition. Her books are relatively pricey -- even at Amazon -- so it took me a while to get them. But most definitely worth the price for all the info and the wonderful photos contained in each.

Enough with the promo -- I'll shoot photos today as I go along and post some tonight or tomorrow.
Posted by Connie Rose at 7:29 AM

It's amazing that that is fabric and not some abstract painting done in oils. Very well done!

This is really special.