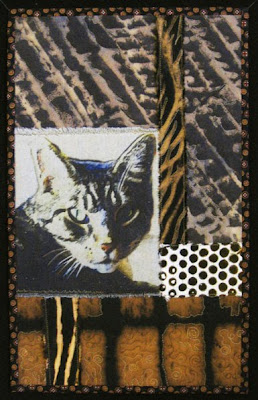 I've begun a new series, of sorts, of smallish, simpler work, each piece of which will be built around digital images. As it happens, I was sorting through my box of images on fabric last week and pulled out this photo of my beloved BeeGee, from early last year, to begin the series. The image is the same one I used on my 2nd weekly quilt from 2009, this one printed on Osnaburg homespun cotton. The first image was printed on rust dyed muslin, and you can see it here. 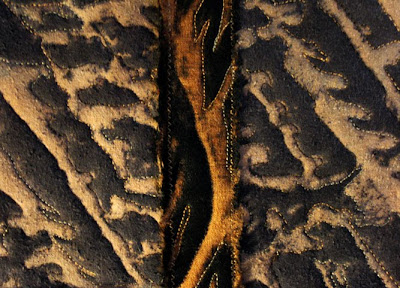 I have a second piece in this series ready to quilt this week. Today I'm working on the first articulation of my idea for Fiberactions' Convergence theme. I painted the piece over the weekend with watercolor crayons, and today I'll be thread sketching on it. It's most likely I won't show these pieces until the final quilt is revealed on May 15, so you'll have to be patient.

Getting a late start again this morning...I've slept later the last few days, which is a good thing as I'm usually up pretty early. So off to the studio soon.
Posted by Connie Rose at 8:29 AM

Love this piece. The subject matter doesm't hurt either. I look forward to seeing more in the mini series and what you are going to do for the fibreactions convergence.

You never cease to amaze me: another gorgeous piece!
What kind of printer do you use? I'm having some serious issues with mine.

I really like this idea for incorporating digital images. I hope you view it as flattery if I try this myself. I've struggled for so long to figure out how to use such imagery in a way that makes sense in a textile and have come up short. This seems so obvious but obviously not!