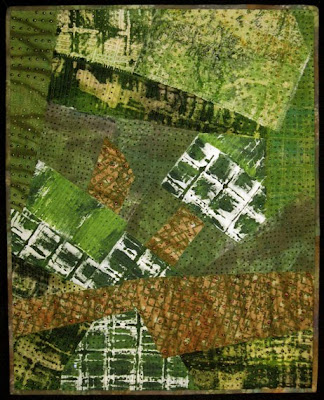 At long last, Fields Of Dreams is complete! How many thousands of beads later, I'm not sure. The entire surface was embellished with size 11 seed beads, with a few 6s and 8s thrown in. Once I added beads to one section, I couldn't not bead the entire thing. But it's likely I won't do that again real soon! 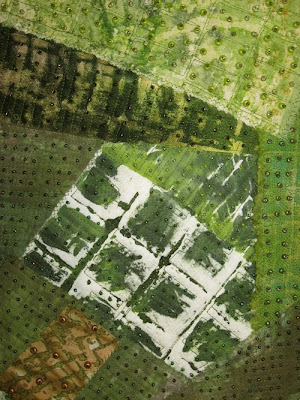 The rusty areas became pumpkin patches, although they weren't that in the original photograph. The pumpkins, though, lead me to give this quilt a second name, Victoria's Garden. My best friend, Vicky, grows amazing organic gardens every year, and her husband used to raise and enter competitions with giant pumpkins. So this piece is an homage to their nearly-complete food sustainability.

And speaking of pumpkins, I have a sweet potato pie in the oven as I write this ~ even better than homemade pumpkin pie IMO. Interesting that I've been baking pies for the past couple months, three of them so far, anyway. I guess it's early-onset holiday season!
Posted by Cate Rose at 4:59 PM

Oh, that is nice. I want to do something similar to this for out Bird's Eye View show. Can I just enter yours? LOL

There sure are a lot of beads but they do suit the quilt. It is wonderful.

I can't believe you've sewn on all those beads! You are an amazing woman. I hope you are appreciated all over the place. I think it is wonderful.

Great work, Connie! The beading completes the piece beautifully. I know what you mean about not wanting to do that again soon... I just saw some pieces where beads were used as an enhancement... much less work, but for this piece I think you needed the all-over treatment. Congratulations on sticking to it! And I hope the pie came out as tasty as it sounds!

Great piece. I sm s very slow beader so I can't imagine doing this but it really does suit the piece/

Thank you all for your wonderful comments!