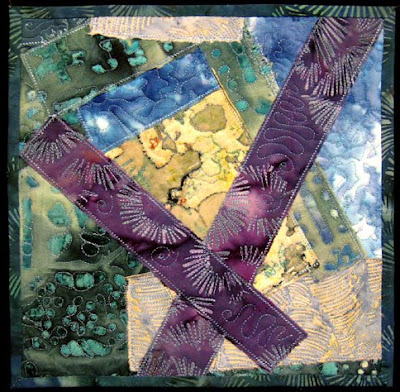 Part of the soundtrack of my life when I was quite young, was Rhapsody In Blue, George Gershwin's gorgeous piano composition from the 1920s. No, I'm not THAT old, but my father was into jazz somewhat in the 1950s, and we had a 33 rpm recording by pianist Oscar Levant that was played alot in the house. Lucky me -- I hadn't remembered even this until right now! My dad was also into bossa nova, the Brazilian music popularized by Antonio Carlos Jobim and Joao Gilberto. Wouldn't you know that all the CDs I carry in my car these days are jazz, specifically Jobim himself or other jazz musicians' covers of his work. So Brazilian jazz is the soundtrack in my head now!

Anyway, back to the matter at hand ~ this quilt is Rhapsody In Blue ~ 13/52.2009. Between packing and making trips down to Fortuna (two planned for today, two tomorrow, two on Friday), I'm still quilting! And as this is the 13th weekly quilt this year, we're one quarter the way through this year already. Kind of hard to believe. I don't think I ever experienced a winter passing quite as quickly as this one did!
Posted by Cate Rose at 8:56 AM

See? I knew we had stuff in common! I'm a long-time jazz fan, although I don't get into who and what, but the genre has always been a fave! And I grew up listening to a broad spectrum of music, from the classics to show tunes, music from my parents' generation, the Doors (gotta love 'em!)
BTW, the quilt is beautiful, but I think winter has lasted too long this year!
Happy day,
Judy