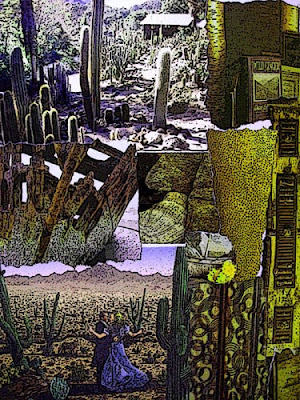 In the absence of my completing textile projects on a more regular basis, I decided I would photograph and post collage journal pages, mostly, for a while. They may as well be textiles, I could just as easily do some of this stuff on fabric. But I do like working with paper images, the immediacy of it, being that I merely have to fish around in my stash of images and clippings and arrange them to my momentary liking.

The piece above is an homage to cactus, which I truly love. Although there are really only two images of cactus -- the couple dancing at the bottom, which was a greeting card I purchased years ago, and the photo at the top, which I took back in 1989 of the cactus at the botanical garden at U.C. Berkeley. I was studying horticulture and landscape at the time, at Cabrillo College in Aptos, and did a photo study of plants in situ at the Cal botanical garden as well as the Strybing Arboretum in Golden Gate Park, San Francisco. The remaining images in the collage evoke the textural qualities of cactus.

I had my hair cut yesterday, for the fourth time since I finally got tired of letting it grow out, which was only about six weeks ago. Now it's short again, but not too, and this cut rivals the formerly best cut I ever had in my life, which for eons appeared to be impossible to reproduce, though I tried over countless years with countless hair stylists. So I am definitely a Happy Camper today. My hair has always been difficult, and it's worse now in some ways than it's ever been. Aging and hormones. Anyway, I've always been really attached to my hair, in terms of having far too many bad hair days when it wasn't behaving. Which was often. Which is why I'd let it grow long now and then. Because I just didn't want to have to deal with it. But then that got to be way too much to deal with. So off it came. In stages. And now it's exactly where I want it to be, and I'm giving myself the gift of wearing my hair the way it looks best on me and the way I like it best, even if it means having to have it cut every 4 to 6 weeks.
Posted by Cate Rose at 10:09 AM

What? No Good Hair pic?

Okay, Connie, we need a picture of this stylish new haircut! Wanna trade? My hair is straight as a plumb line without the stylist's help, and I always wanted curls...
Cheers - Sandra

I think the hair resignation comes to us all in the end. I got there myself a couple of years ago, and now I just tell myself my stylist is a hair therapist and I pay her to deal with my hair issues so I don't have to. It hurts less that way:-)

Funny you should mention hair! I started wearing my hair in a 'Beatle' cut back in '66, then went longer, shorter, curly, straight, long, short, long... well, I'm back to the 'Beatle' cut again, and I think I'll just stay here now!
I want to see a picture too... c'mon!