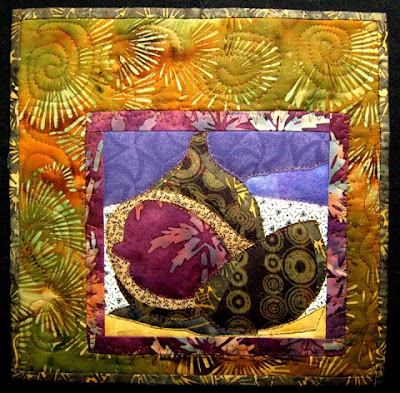 My first quilt of 2009! Also my first of 52 weekly 9" x 9" quilts (altho I may change the size format after working with this for a bit), and this one incorporates an exercise from The Art Quilt Workbook having to do with utilizing digital images. This was a photograph I downloaded off the Internet, traced, and translated into fabric. Can you guess what the fruit is?

I've continued my experimenting with printing digital images directly on fabric. After several attempts with various coatings on fabric, and having nothing I tried render the dye-based printer inks permanent, I decided to use Bubble Jet Set. And it looks like this is working -- I have four images I printed earlier today drying now, and they've already been washed after setting. The images look clear and strong. I also purchased some fabric softener today, because I want to give that a try, too (it's far less expensive than BJS). Numerous people say that a 50/50 blend of the softener and water will yield the same permanence as BJS, with dye-based inks on fabric. So I'll see. I'm still curious about trying Golden Digital Ground, which was recommended over the Golden Gel Media, which I tried but which did not make the image permanent. But I do like the fact that BJS and fabric softener will not affect the hand of the fabric, which is a big deal to me right now. So I'll likely hold off on the Digital Ground for now.

So now that I've got some good digital images on fabric, I'll move on with another assignment in The Art Quilt Workbook. Other studio goals for January include finishing two pieces of handwoven, surface designed art cloth, completing the current weavings on the loom (I'm nearly finished with the first of three), applying to three or four shows I'm considering, planning several more finished art cloth pieces, and a few more small quilts (besides the weekly ones).

I feel like I'm off to a good start already this year -- and it's only January 2! The holiday energy is behind me and I'm looking forward to all that 2009 holds.

I thought you didn't make uilts (oh, now it's the kew that doesn't work).
Fig? Avocado? I hope to see you in June.

oooh. that is really nice. I love the color. I'm guessing pomegranate.