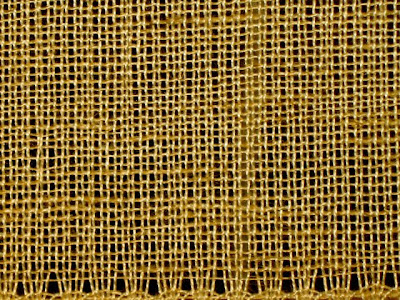 Finally, I got the new warp beamed up and started weaving this new piece. It's 20/2 cotton warp and fine linen singles weft (the same linen I tried warping with originally), with a sett of 30/30. Greatly magnified here, of course. It's actually the finest thing I've yet woven, and now that I know what I need to do warp-wise, more about which in a moment, I want to do lots more fine work. In fact, I think I see a woven future for all that very fine silk I spun up over the last few years!

Here's the about-which part: Remember the difficulties I hoped to avoid last week, when I cut off the linen warp right after starting to beam it up? Well after tying on the newly-wound cotton warp (i.e., tying each cotton end to a linen end), I had enormous difficulty beaming this warp up, much to my chagrin. I spent all day Friday working on getting 6 yards beamed on -- I had so much difficulty and so many tangled warp ends that I cut off the last yard! Other than the previously mentioned Silk Warp From Hell, I'd never had this much difficulty beaming up a warp before, and couldn't for the life of me figure out what the problem was.

So Saturday morning I called Yarn Barn in Kansas, from where I'd purchased the 20/2 cotton, and the good folks there gave me a lesson in warping. Being a self-taught weaver, I was clueless about this, but probably many of you are already doing this. I warp front to back and I've always taken out the lease sticks (inserted before sleying to maintain the cross in the warp ends) right after sleying the warp through the reed. And I've always combed the threads with my fingers to straighten them, as I beamed up. Wrong! YB suggested I leave in the lease sticks all the way through the warping process, until it's beamed up and right up to where I have dangling ends in front of the reed which I'll now tie onto the front apron rod. They also suggested to NOT comb the warp with my fingers, but to keep it in chains and merely giggle each chain to straighten out the ends. Makes sense to me! Why didn't I think of that before now!?

Another likely problem with the cotton warp was that although the ends were the same length when I sleyed them, undoubtedly they were slightly different lengths after I tied them onto the linen ends, because of the placement of the overhand knots, which over 600 ends was bound to be different in places. The varying length of the ends, dragging by each other as I beamed up, caused the traffic jams at the heddles that I experienced (and nearly pulled all my hair out over! -- and I've got a lot of hair!!).

So, lesson learned, I might even try that linen warp again in the future!

Email ThisBlogThis!Share to TwitterShare to FacebookShare to Pinterest
Labels: weaving

Yarn Barn gave you good advice. As for the giggling the chains: you have to be a bit more forceful than that! Pull really hard on them; lean your body back into the pull to exert more force. Then, beginning at the point farthest from you, strum the warp chain you are holding tightly with one hand, strum it with the thumb and first or second finger of the other hand. You will probably see warp ends loosening up and sagging a bit. Keep up the strumming till you get to where your holding hand is. Do that with each chain. Beam on and repeat. If you weight the warp chains so that they are under a great deal of tension, you can do what Kathy Meek does: take a lease stick or yard stick and slap the warps. One more thing: if you are going to warp with fine yarns, especially silk, please consider warping back to front.

Sticky and fragile warps are the weaver's nightmare. I have found that sizing helps tremendously and use gelatin with great success. It works on handspun singles like a dream and tames all the fuzzies when you warp and weave. It looks quite nasty while you are weaving, but washes out without any problem. My recipe came from Alden Amos Big Book of Spinning. I agree with Peg, warping from back to front is easier with troublesome warps, but once we get our warping technique in place, it is hard to change gears.

Hi, Connie - I agree with both Peg and Beryl, try b-to-f warping. It's the only way I've ever done it, so I can't compare against f-to-b. But I never have tangling problems with fine threads. Also, if you have (or can convert a plain beam) sectional beaming is another way to minimize tangles, as you're only dealing with a 1- or 2-inch bunch at a time, not the whole width of the warp. Best wishes of the season - Sandra

I've done both and back to front is the best way to avoid nasty tangles and tension headaches. Not only do you leave in the lease sticks, you don't even thread the heddles until you have the entire warp beamed on smoothly. If you don't want to go for sectional beaming, you also need a raddle on the back beam which will help you divide up the warp into inch segments and keep it from piling up. Are you using a firm paper or corregated cardboard between the layers on your warping beam? Another must in my experience.
Warping doesn't have to what keeps you from weaving more.
:Diane